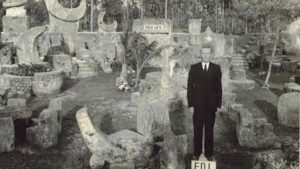 All around the world, there are weird bizarre, truly odd constructions that simply defy human comprehension. Man-made structures that fray the very edges of sanity and make you do double-takes wondering what wild dream-inspired them. Buildings shrouded in mystery, purpose unknown, poking and prodding the surreal. Frames snatched from the creative fueled fevered mind of Dali. Spots riding the knife’s edge of beautiful and awful. Places not as weird as the haunted Coral Castle.

Then, there are places where you turn to your loved one and simply go:

“Shrooms… That’s the only explanation.”

Those wild college nights with Dark Side of the Moon and the Wizard of Oz gifting you with on-point insight into the cerebral workings of the mad… or the terminally chilled and mellow.

Well, time to put on your stoner cap, switch Willie Nelson on, and find the Cheech to your Chong, because we are heading into a spot so out of left field that left field was pulled over by the pigs and kicked into the drunk tank. Reality on edge because someone spiked her punch and then went:

Coral Castle is reality two days after that exchange, pants on her forehead, and her neurons rewire. The sort of bad trip that makes Brian May come up with “Animal Sounds”. Everyone taking notice… even the supernatural.

Coral Castle is not only haunted, it’s also the only place on the planet where the supernatural visits religiously, almost on a pilgrimage, and scratches its head. It’s weird on weird action. It’s a conglomerate of the abnormal, visited by the outlandish and then worshipped by the peculiar… and that’s just a description of what happens during opening hours. Some of the tourists simply don’t pass the smell test; the place should employ a staff of lab coat wearing docs’ with butterfly nets. And it’s 24-hour madness. Once the day crew calls it quits, and the last doomsday prophet and tin foil wearing buffoon is kicked out, the nightly riff-raff, with sharp teeth, UFOs and ectoplasm, take up the baton and gives the shrine to the looney a look over. Aliens, boogiemen, vampires, the very Elder Gods, transdimensional deities, angels, demons, werewolves, pixie and the Winter Court of Fairy staring up at the conglomerate of structures and going, in unison:

“Holy Moley, what was this guy on?”

Coral Castle, where even the ethereal and omniscient is left dumbfounded.

What The Heck Is Coral Castle?

The whole bizarre menagerie of rocks was crafted by Edward Leedskalnin. The oddball genius did such a fine and intricate job that he connected the pieces such precision that no light passes through the joints. He did all of that on his own, without the aid of machines – moving tons of limestones from the coast, AFTER he dug it out by bare hand – and forgoing even mortar or cement.

The thing is so well built that the various structures haven’t even shifted an inch… in honeycombed land of shifting soul, sinkholes, and category 5 hurricanes.

“If anyone ever questioned Ed about how he moved the blocks of coral, Ed would only reply that he understood the laws of weight and leverage well. He also stated that he had “discovered the secrets of the pyramids”.

Who was Edward Leedskalnin?

The best way to do this in a quick dirty way, before you close the browser on account of “too much reading”, is to rip the band-aid off and do a timeline of Edward.

Given the aforementioned pedigree, is it any wonder that the modern-day Stonehenge attracts all manner of bat-guano insanity? Weird? Coral Castle left that mile marker in its rear mirror a long time ago… now it’s gone to a moorland where even that concept seems mundane by comparison.

The Strange Happenings of Coral Castle.

The massive roadside attraction is a carnival of weird.

“Leedskalnin also crafted a sundial that tells the time within two minutes of accuracy. This solar clock stands directly across from a water pool carved from a huge slab of coral, with coral crescent moons on each side of the basin. The crescents represent the waxing and waning lunar cycles; the circular pool represents the full moon.”

The area seems to have an energy to it. Some have pinpointed the thaumaturgical surge to Ed’s genius-level manipulation of magnetic and natural forces, a sort of mutant power he long hinted at.

The Pandemonium Of Weirdness That is Haunted Coral Castle.

Florida is known for its alien sightings. Off the coast, you have the Bermuda Triangle, and up by the panhandle a place called Gulf-Breeze that’s a Spring Break bonanza for ETs and College snowbirds.

But The Coral Castle has all those places beat. The spot is a pit-stop for UFOs. The region is swamped by continuous sightings of little green man – or grey, depending on your beliefs – and massive formations of UFOs.

“The throne is really a representation of the seats used by alien pilots to control their ships. The attraction is actually an ancient Egyptian pyramid.”

The region has more spooks than an Indian burial ground after land developers decide to “relocate” pesky relics.

“At night you can see, near the tree lines, fireballs, and St. Elmo’s fire. During the day, cameras fritz out and when people develop the film they usually catch a specter or figure where there was none. The staff often report shrieks and screams coming from certain spots.”

One of the most recognizable phantoms in the area is that of Ed. He’s usually seen before dawn, taking measurements and looking at his kingdom dreaming on how to expand it.

Before the area around the castle flourished and land mongols beat back the brush, the Castle had a reputation for attracting wildlife. The place has a mystique to it and certain apex predators, like Florida panthers and gators, flocked to the spot like it was doused in AXE body spray.

And, if that wasn’t enough, many people claim that a colony of the region’s Big Foot – The Skunk Ape – used to habitat the area around the Castle.

Fairy, pixies, hobgoblins, the Wild Hunt… The United States as a whole looks on the fairy folks in the same way little girls look at Tinker-bell – in awe and mesmerized by their cute innocent magic. In Europe, where the legends originated, the Fae make Jack The Ripper look cuddly. They are bloodthirsty, sinister tricksters that want nothing more than to play Chinese Stick on our dried-out rib bones.

The Castle seems to have become a favorite hunting ground to them. For some odd reason, there are always reports of strange creatures and elf-like beings prowling the massive structures. On certain nights people swear they hear the chattering of fearful beings in the Castle’s grounds.

“Some folks even come to strike a bargain with whatever is out there. Some think it’s a wendigo or some sort of wraith, but whenever we get some old-timer from the North – the European North – he comes up to us and tells us we got ourselves a fairy infestation. ‘You even got fairy road,’ so have even said. We used to laugh our tits off. Fairies! Then we went online and did a bit of reading. No wonder some of Europeans come out of this place as white as a sheet.”

Sometimes, going to the Coral Castle as a whole is like coming out of science experiment conducted by Timothy Leary.

Check out some of Miami’s other haunted places.