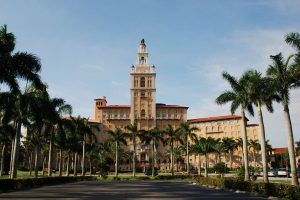 There’s a reason why the troupe of the haunted hotel is so affixed – like a catchy song stuck – in our minds. Let’s talk about the Biltmore Hotel and why that one clique of characteristics is set in stone in the annals of horror history. Why the grandmaster of the macabre, Stephen King, decided to base a cautionary tale on alcoholism and the perils of a winter wonderland in that pandora’s box known as the Overlook Hotel.

The Biltmore in Miami is all of those stereotypical tales mixed in with a couple of extras that would even make Telenovela writers do double-takes. It’s all that plus a bag of chips… one with 0 negative dipping sauce instead of spicy guacamole. From

The story of the Biltmore Hotel Ghosts

In 1925, George E. Merrick combined forces with Biltmore hotel magnate John McEntee Bowman. Florida had just been opened up like an oyster by Flagler and every snowbird was going gonzo for palm trees.

That small era, before the market went belly-up and Florida beat back and blue by a few hurricanes, was called the Florida land boom. The crocodile-infested swampland was being bought at quite a rapid pace and converted into the vacation paradise it would be known for. Up until that point, most hotel chains were spearheading all their considerable efforts towards the coastal area. The general idea was and still is, “sand, bikinis, margaritas… MONEY!”

But, there was a niche group that those luxury places where strong-arming into the main canals, the one group they simply couldn’t please… golfers. They just simply didn’t have the land.

The Biltmore Hotel was crafted with the following elevator pitch in mind:

“A great hotel…which would not only serve as a hostelry to the crowds which were thronging to Coral Gables but also would serve as a center of sports and fashion.”

In January 1926, ten months and $10 million later, the hotel debuted with a sumptuous inaugural that made nationwide headline news. Shops, seeing the opportunity started to chain their bandwagon to the hotel’s steam engine; every high-en brand in the world opened up around the Biltmore. Coral Gables went kaboom in a matter of months.

The Duke and the Duchess of Windsor, Judy Garland, Ginger Rogers, Al Capone, The Vanderbilts, Bing Crosby, and most Presidents from the turn of the 20th century made the Biltmore their vacation home.

The posh Biltmore has offered weddings, world-class golf tournaments, a shelter for hurricane survivors, spa services, and served as set for various movies and television programs such as Bad Boys, Shock Waves, CSI: Miami, Popi, and Miami Vice. It’s this a milestone in the area and protected by the historical society.

During World War II, the hotel was converted into a 1200-bed hospital and renamed the Pratt General Hospital. Many of the windows were sealed and the marble floors covered with government-issue linoleum. The hospital had a functional operating theater, an ER clinic, and a morgue. Miami was basically browbeaten into the war-effort by Uncle Sam the go-to spot for maimings, friendly fire incidents, and the many debacles of a working military camp – exploding with testosterone – was likely to have.

Let’s March Out The Spirits.

With that little pedigree, is it any wonder the hotel sometimes seems like that one scene from Ghostbusters when Bill Murray and his crew try to catch Slimer? The hotel has become the crown jewel in Miami’s spook uproar.

On March 4th, 1929, a New York wiseguy – that’s mobster for those not in the known – called Thomas “Fatty” Walsh was killed during a gambling dispute in his room. Why his room? Because the narcotics chief – closely associated with the likes of Dutch Schultz and Charles “Lucky” Luciano – had paid the hotel staff so they would look the other way on his bivouac speak-easy/casino. Fatty was known for a couple of things: his girth, his love of long-legged dames, his need to clock people in the gut when they looked at him funny, his involvement in various gangland shootings, and the fact that he had every judge in the county in his pocket. Oh and his wild parties… It was the Gatsby Era, alcohol was illegal but morphine and coke could be bought at your corner pharmacy.

After Fatty bit the big one and went to the great Bingo Hall in heaven or the not-so-great strip club, his spirit started doing day-trips the hotel.

People have reportedly seen Fatty galivanting around his room. Others, particularly ladies with certain assets – Fatty had an eye for legs – have gotten on the elevator and found their ride stopping unexpectedly on the 13th… the elevator doors refusing to shut close and that them to their destination.

Other folks have claimed that lights have a bad habit of blinking on and off in Fatty’s floor.

Finally, former president Bill Clinton has stated that Fatty didn’t allow him to watch football on his television when he stayed in the Biltmore. It seems that kindred spirits – with a taste for the ladies – gravitate towards each other.

Fatty might be the most prolific and legendary ghost in the Biltmore, but he’s not the one. He’s just the only one we can pinpoint an origin for, plus it also helps that his legend comes infused with gangster lore.

“The best stories of the Biltmore are from when it was closed after World War II. High school kids used to sneak in and would see people walking around with their feet floating above the ground. Or they’d get tapped on the shoulder and see men in army uniforms.”

And not just soldiers and army nurses, dozens of other specters seem to run rampant in the Biltmore.

Tales of babies crying through walls, noises from a party that wasn’t happening, guests coming up to the front desk and then vanishing as the clerk comes to their aid.

In recent times, the biggest phantom seems to be a red-dressed woman who looks at the bar’s piano player with a mile-long stare… only to vanish the very second the musician stops his ivory fandango.