You just have to have a cemetery. There’s really no getting around it, if you’re investigating the undead, the supernatural and the creepy, sooner or later you’re going to stumble unto a cemetery. There are simple rules in the parapsychology game, Indian Burial grounds are always cursed; hotels might as well have a turnstile for ghosts; if it’s more than 50 years old you’re bound to find something ectoplasmic festering in its bones; if it was once a battlefield you better put on your rain slicker because you’re going to get slimed; and, if there’s a cemetery on the map, you will find something nasty lurking within its gates. Like hauntings at Miami Cemetery.

Cemeteries as a whole have always been bound to the ethereal and otherworldly. There very designs and much of their customs and idiosyncrasies are directly linked to the supernatural. They are havens and cabinets of curiosity for superstitions and bizarre rituals… most meant to keep the forces of darkness are bay, or at least preoccupied.

And that’s just 4 of the guano insane superstitions that form modern-day ritual practices. Well, with that little intro in place, and having covered why cemeteries will always be a magnet for ghost stories and urban legends, let’s dive right in and talk shop about the City of Miami Cemetery.

The History of Miami City Cemetery.

Located at 1800 Northeast 2nd Avenue this National Register of Historic Places holder has a rather bizarre chronology.

Because the first recorded funeral was of a white man named Graham Branscomb, a 24-year-old Englishman who perished of consumption in 1897. Note that I used the word recorded. Way before Graham bit the big one and was buried on the spot, the land was already being used as gravesite by the hundred or so African-American and black Bahamians that conformed the unincorporated Miami population… they just didn’t keep records of who went where.

African Americans made up one-third of the city’s population, but due to land deed clauses and racially spurred redactions of the law, they were mostly confined to narrow wagon track county roads and the northwest section of Miami now known as Overtown. When the cemetery was finally incorporated into Miami proper, it was built and constructed by a primary black labor force.

The place is a warren of sections and add-ons. Every few years after its inception a new piece or branch would be added; The Julia Tuttle, the “Mother of Miami” section, The Catholic section, The military – American Legion, Spanish- America War and other wars – section, The Confederate Dead Section, The Jewish Section, The pioneer families section, etc.

One of the most distinctive qualities of the cemetery is the fact that it is one of the few of its kind where the owners of the plot actually hold a deed to the land where the plot is situated. The only way you’re getting buried is if you either have a deed or can prove a familial relationship. As such, it is an upper-crust cemetery whose inhabitants – past, present, and futures – are basically a who’s who of Miami history. The headstones and mausoleums embellish this fact and try to highlight the pedigree of its inhabitant.

In other words, you’re going to want to have an autograph notebook in case you do see a ghost.

The Hauntings of The City Of Miami Cemetery.

“Once a man actually interrupted one of my annual walking tours of the cemetery. He just cut me off and laid the carved-out heart of an animal at the base of a tree as a Santeria sacrifice… and that’s rather normal by Miami standards.”

The place is a madhouse… Really, it’s just off the wall insane. So, in order to get everything in order and not miss a beat, I’m going to bullet point the hauntings and strange tales. There are a lot of ghosts in this place, and that’s only some of the supernatural mayhem that’s crawling around.

“You have Confederates, Union soldiers, and even veterans from World War I buried in that place. There’s something creepy. You sort of feel a deep emotional violence in the air. The former security guard loved to talk about the ghosts of this place, but whenever we got to the military section he would just button the hell up. ‘Never go there after dark,’ that’s all he’d say.” 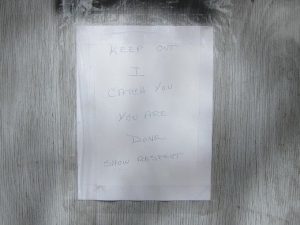 “Miami is a melting pot of thousands of religions and cultures. Santeria, voodoo and other practices are just a way of life in this place. Most are law-abiding citizens and in many cases white or light practitioners, but there is also a dark breed that calls Miami their home. We normally see them in cemeteries and holy sanctified ground trying to scare up something and cause a little havoc. They leave a stain in the aura of the place and disturb the dead. Whenever we get a ransacked grave, we just know that night and subsequent nights are going to be creepy and strange.”

For more check out our Ghost Tours of the Miami area and other hauntings of Miami.