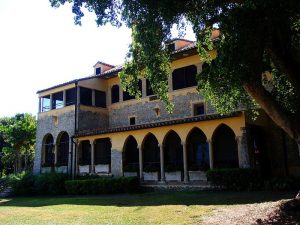 Florida had its own gold rush. A period in its history where every eye of the nation turned towards its sandy streams and dollar signs flashed across each and every land baron’s forehead. Only, instead of nuggets of gold lining the streams, the fortune it was hustling was beach-front property. So let’s see what happened about the hauntings at Deering Estate.

Henry Flagler was the first tycoon who saw the value of the Sunshine State. The man steamrolled, quite literally, his keister into the peninsula and started paving the landscape. Hotels, beaches, sand dunes and a rail system that transported, like cattle, wealthy snowbirds into the free-for-all madness that was, and is, Florida.

With that upswell, and everyone basically flocking to Florida to not only break bank but to get in on the ground floor on what could easily be the next big thing, the state became inundated with what some would later call carpetbaggers.

And, the filthy rich party hard.

One of those Mongols and titans was none other that Charles Deering.

Deering was born on July 31st, 1852 in Maine. He was born into money; think silver spoon, only instead of silver it was 24karat gold with small jewels incrusted into it. He was the son of William Deering, founder of Deering Harvester Company, and brother of millionaire industrialist James Deering. Deering, filthy rich by the time he popped out of his mother’s womb, started moving his money about and became a rather shrewd businessman. By the time he took his father’s company, the man had already tripled his family’s fortune.

At the beginning of 1890, thanks in part to his friend Flagler, Deering began wintering in Florida, mostly in around St. Augustine. He was deeply enamored of the state, and as Henry opened it up, Deering went behind him like the pilot fish he was. Henry the shark gobbled up land, while William snacked on the leftovers.

In 1908, William and his half-brother Charles became interested in South Florida. Both started to invest heavily and buy up land. Their first purchase was 212 acres in Buena Vista. That small purchase blossomed and by late 1915 Deering stated to go all Pac-Man on the soil around Buena Vista. He soon engulfed all of that zone and started to branch out further down the coast, along Old Cutler Road.

By the big land boom of 1925, Deering and his half-brother Charles had basically bought out most of the land South Miami was later built on. Two of the most recognizable houses/mansions of the lower half of Florida are theirs; The Deering Estate and Villa Vizcaya, on Biscayne Bay in Coconut Grove.

The History of the Deering Estate.

Before Deering seized the place, cause:

The area had a wooden house known as the Richmond Cottage. It was a small Inn manned by the Richmond family, primarily the matriarch Edith Richmond. If you came to Florida for a period of time, you stayed at the Richmond’s. This place was a happening joint that had on its registry frequent stays by Henry Morrison Flagler and James Ingrahm.

The Cottage received the equivalent of a TripAdvisor’s plaque in 1901 when it was named:

“The most southern hostelry in the continental United States by The Miami Metropolis in 1901.”

The area around Cutler Bay was basically a moorland barely inhabitant with nothing but savages that made the pair from Delivarence scholarly by comparison, out-of-control vegetation and crocodiles demanding a seat in the city council.

“A few houses, with two good stores, those of Tweedell Brothers, and Brown and Moody, each of whom has built up a thriving business with the surrounding country. Cutler has daily mail and three wharves from which boats take freight and passengers to and from Miami. There is one good hotel, the Richmond Cottage which overlooks the bay.”

In 1916, a year after Deering stayed a spell at the hotel, he pulled a Bruce Wayne and went:

By 1922 Deering had leveled most of the hotel, rebuild in its place a huge mansion and moved in until he slipped off in 1927. 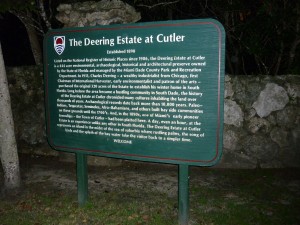 “So, there’s the ghost of some old geezer rumbling around… Maybe one of those chicks from the great Gatsby. At the most an old senator, probably sniffing out the girls and looking for hidden treasure…”

Well, people do say they have seen Deering’s ghost, and some ladies straight out of the roaring 20’s,  but the real paranormal whammy comes from the Indian Burial Ground the place was built on. Yup, I buried lede. Oh and a fossil mount. I really should have started with that Poltergeist like twist.

The Culter Burial Mound, on Charles Deering Estate, is one of the few surviving prehistoric burial mounds in the Miami-Dade area. The place was once riddled with artifacts and every time someone decided to drill a spike in or put up a new palm tree, the gardeners and construction crews would just bag the unearth and disturbed bones and toss them out onto the coast. Henry Perrine, Jr, son of Henry Perrine, removed several skulls and complete skeletons from the mound in the 1860s while searching for Black Caesar‘s treasure; just so I can really underscore what happened:

The spoiled son of Henry Perrine, on a  wild goose chase for the lost treasure of an 18th-century African pirate, went gonzo with a shovel, unearthed buried natives and then – cause reburial was such a hassle – had his manservant toss them into a sack and leave them by the side of a dirty road. Oh, if you’ve ever seen a horror movie, you just know that’s just bad ju-ju… You’re asking for it.

And the pillaging didn’t stop there, Ralph Munroe also went goffer mad in the mound in the late 1890s. By the time Deering bought the land, the 12 to 18 buried Native American’s were practically being used as scarecrows. While Deering was building his mansion, the artifacts – that’s code for bones – were being played with by the neighborhood kids. The ankle munchers using the skulls as toys.

Then, as if the place wasn’t cursed enough by the bad mojo of the foolhardy, in 1979 a sinkhole opened up in Deering Estate. The land below Miami and most of Florida is a honeycombed construct one bad rain cycle from collapsing and taking everyone to hell. Anyway, a sinkhole opened up and – I’m not joking here – a Pet Cemetery was discovered. Yet another burial mount only this time of dozens of bones and artifacts associated with animals from the Pleistocene Era.

“Hey, you want to stay the night in this great house? Beachfront property, servants, away from prying eyes. The catch? Not a thing, just a bit of history. What history, you ask? Well, it has a ransacked Indian burial ground, a pet cemetery and a couple of oddball tales of rich folks acting like Black Dahlia jack-asses… Why are you running away?”

Too many to enumerate. The place is such a hot spot for ghostly activity that it actually has an official Ghost Tour sponsored by the Florida Historical Society. A ghost tour you can book from the Miami-Dade County office.  A governmental ghost tour… let that sink in.

The place has been the filming site for every ghost hunting show on the planet. On any day of the week, you can probably prance around the estate and stumble unto a team of parapsychologists doing research, some ghost enthusiasts checking out cold spots and poking corners with EMF meters and a pack of Goths trying to trade their souls to the Old Ones. Stand outside the main gate and toss a rock and you’re liable to hit, at least, two psychics.

Collen Kelley, part of a team that investigates the paranormal at Deering Estate, has recorded over 60 ghost voices while walking around the mansion.

YouTube, meanwhile is plagued by video on top of video of specters and ghosts in Deering Estate ground.

“At least once a week I get poked or a feel the presence of something sneaking by me. When I’m on the phone, I sometimes catch a voice, other than the one I’m talking to, interrupt my calls. I never travel on my own when doing my nightly walk. And, more than once, I’ve seen weird shadows and thinks moving out of my line of sight. We have sleepovers, at least twice a year, and some of the guests can take all the paranormal activity… they call it quits in the middle of the night and simply bolt.”

For more check out our Miami Ghost Tours and other hauntings of Miami.