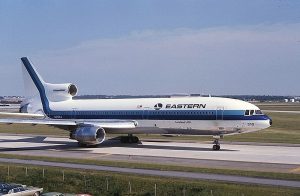 The Ghosts of Flight 401

Stockstill: We did something to the altitude.

Ten minutes after that exchange, everything went to hell in a handbasket.

Flight 401 crashed headlong into one of the most inhospitable parts of the United States, the Everglades. What followed not only left a trail of body parts, broken hearts, mass hysteria, damning accusations but a mass grave now populated by alligators and ghosts. This is the tragic tale of Eastern Air Lines Flight 401 and the madness it left in its wake.

Eastern Air Lines Flight 401 was a regularly scheduled flight that connected the Big Apple’s JFK airport with Miami’s wild beach soaked riviera. There was nothing particularly memorable about the route, every pilot and flight crew in Eastern Air Lines had one time or another cut their teeth on that routine flight path.

On December 29, 1972, the Lockheed L-1011-1 TriStar – Flight 401 – left New York and flew on a downward vector to Miami, Florida. Under the command of Captain Robert Albin Loft, an expert navigator rated 50th in seniority at Eastern. Captain Loft had been with the company for over 32 years; a total of 29,700 flight hours. His flight crew were all experienced veterans. They were top-notch and knew the ins and outs of commanding a plane that size.

As for the cargo, the flight was booked solid. Standing room only so to speak. New Year was two days away and Miami was a hot and sexy place to celebrate the occasion.

Everything was going smoothly. The 13 crew members on board were passing up cocktails, the 163 passengers were passed out – either drunk or asleep. At 23:32 the plane began making its approach to Miami International Airport. Sits in an upright position, tray tables closed.

The flight was routine until 23:32 when the plane began its approach into Miami International Airport.

A light in the Sky

After lowering the landing gear, the First Officer saw that the indicator, a green light identifying that the nose gear was accurately secured in the “down” position, had not turned on. The crew began to panic. The pilots tried again, they cycled the landing gear, but zilch; the confirmation light was off.

The tower was radioed and Flight 401 was instructed to enter a holding pattern while the cockpit crew investigated the issue. The damn light simply wouldn’t turn on. The pilots removed the light assembly and an engineer was sent down below to confirm via a small porthole if the landing gear had deployed or not.

Everyone in the cockpit was fascinated and fixated on the damn light.

No one, not a single one noticed, when the autopilot – switched on so teh crew could focus on the lightbulb – started to act up. It was a gradual descent, little by little the craft lost a couple of meters… it was so gradual that not even the well-seasoned Captain noticed anything hinky until all hell broke loose.

Suddenly the plane plunged 250ft in 70 seconds; an altitude warning went off –  C–chord chime located under the engineer’s workstation… the same engineer that was down below checking the status of the wheels. The crew didn’t react. 50 seconds later the plane, once more nosedived, again, this time losing more than half its assigned altitude.

Stockstill unaware of the altitude difference made a 180º turn. He finally noticed the hiccup but it was too late.

The following conversation was retrieved from the flight voice recorder later:

Stockstill: We did something to the altitude.

Less than 10 seconds after this exchange, the jetliner crashed.

Flight 401 was west-northwest of Miami, 18.7 mi from the end of runway 9L. The plane was cruising at 227 miles per hour when it crashed into the ground. With the aircraft in mid-turn, the left wingtip cracked into piece against the surface first, it was followed by the left engine and the left landing gear. Flight 401 made three trails through the sawgrass, breaking into pieces as it circled on its axis in the Everglades National Park.

And the damn light… It was just a burned-out lightbulb.

Robert “Bud” Marquis, an airboat pilot, was out frog hunting with his bud Ray Dickinsin when they beheld the crash. The fuselage finally made contact with the ground and everything lid up in Halloween orange and blazing yellow hues. They raced to rescue any survivors. Their airboat crashing through the marshland at burning debris.

Marquis suffered multiple burns to his face, arms, and legs but valiantly continued seesawing people in and out of the crash site that night and the next day. The man was a hero that ended up saving dozens of lives. The area, an inhospitable and incredibly inaccessible place, proved to be a logistical nightmare for rescue workers. The swamp and its critters gobbling up the dead and living alike. Alligators coming out in hordes to feast, snakes attacking rescue workers, organisms in the swamp infecting wounds and causing irreparable damage.

75 survived the crash—67 of the 163 passengers and eight of the 10 flight attendants. In spite of their injuries, the surviving flight attendants were recognized for helping other survivors. Some quick-thinking actions such as singing Christmas carols to keep up hope and attract the rescue teams’ attention, as flashlights were not part of the regular equipment on commercial airliners at the time, ended up proving invaluable during the crisis.

Captain Loft died in the wreck remains of Flight 401 before he could be transported to a hospital.

Over the following months and years, rumors began circulating that employees of Eastern Air Lines were reporting sightings of the dead crew members, captain Robert Loft and second officer (flight engineer) Donald Repo, sitting on board other L-1011 (N318EA) flights.

These rumors speculated that parts of the crashed aircraft were salvaged after the investigation and refitted into other L-1011s. The reported hauntings were said to only be seen on the planes that used the spare parts. Gossip regarding the sighting of the spirits of Don Repo and Bob Loft spread throughout Eastern Air Lines to the point where Eastern’s management warned employees that they could face dismissal if caught spreading ghost stories.

The Ghosts of Flight 401

The story of Eastern Air Lines Flight 401 starts off right after the crash. For months, hunters, poachers, and wildlife enthusiasts started reporting strange unearthly sights and encounters around the crash site.

“I was just frog gigging went, a face looked up at me from below the surf. A woman’s face screaming up. Spooked me silly. Never been back to that place since that moment… around here, we do our best to avoid that area.”

For months and years after the crash, the area became a hot-bed of supernatural activity. Marfa lights started popping up around the swamp. Specters peered from the gloom into the awestruck eyes of hunters. Things swam below the surface of the swamp, things dressed in rags and tattered clothes.

And that’s not all.

The account of the crash and its outcome was documented in John G. Fuller‘s 1976 book The Ghost of Flight 401. Fuller describes anecdotes of strange happenings aboard other Eastern aircraft. Some of Flight 401’s equipment was salvaged and repurposed for other crafts of the Eastern fleet. A TV movie The Ghost of Flight 401, aired in February 1978. The film was based on Fuller’s book, and it concentrated on the ghost sightings that came into being after the incident.

Eastern Air Lines candidly dismissed that their planes were inhabited by spooks and ghosts. They, nonetheless, reportedly removed all the salvaged parts from their L-1011 fleet.

As time passed and Flight 401 became a distant memory, the recounting of ghost sightings stopped.

An original floorboard from Flight 401 rests in the archives at History Miami in South Florida. Many believe that the piece is cursed.

Parts of Flight 401’s ruins can also be found in Ed and Lorraine Warren’s Occult Museum in Monroe, Connecticut. The investigators were particularly fascinated by the various accounts of hauntings within planes that contained pieces of Flight 401.

For more tales of the macabre, check out our blog.