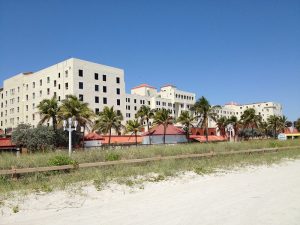 Hollywood is the place to get away from the chaos and confusion of Miami’s nightlife. The town is just 20 miles north of Miami, and its beaches are a hit with retirees, snowbirds, and Quebecoise who just want to get away for the winter. Right off the eastern terminus of Hollywood Boulevard is the Hollywood Beach Resort. The hotel is known for two things; ghosts and bugs. In addition to being the dirtiest hotel on Hollywood Beach, it’s also the most haunted. First built in 1925, the hotel was rumored to be the favorite beachside getaway of non-other than Al Capone. Though the hotel advertises itself as “family-friendly,” it was never really a good place to bring your children. In the early 1900s, a brothel operated on the site where the hotel currently sits. Shortly after the hotel was built, Capone and his crew moved in, and they engaged in activities that were, well, less than savory. The second floor was Capone’s hangout, and his associates supposedly strangled a few sex workers to death in Room 202. As time went on, the hotel’s glory days, if you can call them that, fizzled out. The Hollywood Beach Resort was then ironically used as a Bible School, where students learned about God in the midst of being haunted by dead sex workers. Guests and staff will tell you all about the Choking Ghost of the hotel, whom they say is an apparition of one of the strangled prostitutes. She often appears lying on the floor naked, covered in a plastic bag while suffocating and asking for help. Guests also report floating orbs, disembodied voices, and random cold spots. There’s also plenty of roaches, but that’s a whole nother story.

The Hollywood Beach Resort opened in 1925. Rumor has it that before the hotel was erected, the site was the location of Florida’s only known brothel during the 19th century. After the hotel was built, it began attracting visitors, though tourism was heavily affected by the Great Hurricane of 1926, which destroyed much of nearby Miami. Despite the economic downturn, big-time gangsters like Al Capone still came down to Florida to enjoy the beaches. After all, it’s a great place to get away from the cold, and the prying eyes of the law.

Al Capone had several properties and hideouts in South Florida, and the Hollywood Beach Resort was one of them. It was right by the sea and far removed from his known hangouts on Miami Beach. He often hung out on the second floor. According to multiple sources, some of his cronies strangled a few prostitutes to death in Room 202.

Over the years, the gangster heyday of the hotel faded away. The Hollywood Beach Resort became just another run-of-the-mill hotel on the ocean. Bigger and better hotels were built nearby, and the Hollywood Beach Resort went into decline. The property owners came up with a brilliant idea. They would lease the building out to a local church congregation who were looking for a place to hold their bible studies. Yes, the once-notorious gangster hangout would become a Bible School.

Despite the endless possibilities for shenanigans, the Bible School was unremarkable, and attendance was low. Plus, developers thought it was a waste to have a Bible School on such prime real estate. The hotel entrance was less than a few hundred feet from the shore. Why waste the money-making opportunity on some church group? So in 1999, the building was renovated, and once again became a hotel. The Hollywood Beach Resort was back baby!

The hotel’s renovation was a complete flop. The building was outfitted with new fixtures and was supposed to have a mall on its bottom two floors. Soon after opening, the mall emptied out. It simply wasn’t attracting enough visitors, and the tenants couldn’t pay their rent. The shopowners went off to greener, and busier, pastures. Over time, the Hollywood Beach Resort fell into disrepair. But it wasn’t abandoned, it was very much a functional hotel, still trying to attract guests while struggling to keep up with itself. The water in the fountains stopped flowing. The storefronts in the indoor mall were boarded up. The lack of maintenance meant water damage began to seep through the hundred-year-old walls. All the while it was still advertising its rooms at four-star prices.

Fast forward to today. The Hollywood Beach Resort is known as a dingy second-rate hotel, where roaches and musty smells hang over the beautiful view of the Atlantic Ocean. The blankets are often dirty. Guests might find used underwear lying around their rooms. The ceilings are stained by water damage. Homeless people hang out at the liquor store just outside the entrance. But hey, it’s got a rooftop pool, and the bar’s an okay place to hang…I guess? You can always hang out at the empty mall if you like urban exploration. The Hollywood Beach Resort pulls some pretty bad reviews on Yelp and Trip Advisor, never pulling past three stars, which, in all honesty, is still a bit too high.

Ghosts of the Hollywood Beach Resort

I guess the best part about the hotel are the ghosts, and many of the guests do come for the haunts, assuming they aren’t ignorant about how sketchy the building is. The second and seventh floors of the Hollywood Beach Resort are said to be the most haunted, but guests have experienced paranormal occurrences all over the hotel. The most notable sighting is that of the hotel’s Choking Ghost. Back in the 1930s, some of Al Capone’s associates strangled and suffocated a few sex workers to death on the second floor, in Room 202. The Choking Ghost is believed to stem from that incident.

One guest, in particular, had a close encounter with the ghost. A woman booked a hotel room in the Hollywood Beach Resort with her husband to get away for the weekend. Being quite familiar with the hotel’s haunted reputation, she booked a room on the fifth floor, hoping to avoid the haunts on the second and seventh floors. It was no use. After her husband passed out on his bed, the woman went down to grab food. On her way back, she noticed that she was being followed through the building. She began hearing voices whispering to her. The woman ran the rest of the way back to the safety of her room. After turning the lights off to finally get some sleep, she heard more whispers. Believing it to be her husband, she turned the lights back on, and saw a naked woman in a clear plastic bag lying on the floor, struggling and suffocating while begging for help. She screamed at the top of her lungs, and the ghost disappeared. Needless to say, the woman and her husband were out of there.

Not many guests have gotten up and personal with the ghost, but many report similar experiences, especially on the second floor where the murder took place. Guests commonly report being followed down the halls by an unseen figure, who often whispers or calls them by name. Others say they’ve felt like they were grabbed or touched by a spirit. Usually, they feel an invisible hand grab their arm or foot while walking down the halls, and others feel a tug on their clothing. The guests often say that the invisible force seems to be asking for help.

Some guests have had more hostile experiences. Those who have slept in Room 202 have reported strange banging noises in the middle of the night, while others say the room becomes cold enough to see their breath. Some claim to have trouble breathing in Room 202. But of course, it could be the asbestos.

The seventh floor is also haunted, though it’s much more subtle. The seventh floor is known mainly for floating orbs and strange lights, which many attribute to roaming spirits. Other guests have opened the door to their room only to have the door immediately slam shut. Many also claim similar experiences as on the second floor, like disembodied voices and phantoms following them down the halls.

Miami is one of the youngest major cities in the country, but that doesn’t mean it isn’t haunted. The city has enough ghosts to give St. Augustine a run for its money. If you like urban exploration, then check out the Parkway West Medical Center. This abandoned hospital is home to the ghost of a woman who died during childbirth, and was the site of a murder when a patient of the hospital’s psych ward killed one of his doctors. Read up on the Krome Insane Asylum, which was actually never an asylum, but a cold war missile silo. Now it’s an ICE detention center, further fueling the conspiracy theories surrounding the area. Catch a show at the Colony Theatre on Miami Beach! The Colony is one of Miami’s oldest performance venues and his home to ghost poodle and one very aloof invisible phantom. You should also read up on the top ten most haunted spots in Miami right here!