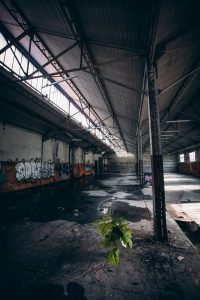 On the western fringes of Miami-Dade County lies Krome Avenue, a road that borders the last bit of civilization before you reach the Florida Everglades. Krome Avenue is already an eerie place; there’s nothing but forests, swamps, and the occasional gas station. Pythons are also known to inhabit the area. It’s also home to the infamous Krome Insane Asylum, an abandoned graffiti-covered structure that’s shrouded in mystery. Though the Krome Facility was demolished in 2015, the urban legends live on. Some say it was an insane asylum that housed an experimental CIA laboratory. The Krome Asylum was a popular place for photoshoots and bonfires, as well as teenagers looking for a Halloween thrill. The large complex layout also made it popular with paintballers. Due to its isolation, it was also used as a dumping ground for bodies, and at least one murder involving the Asylum remains unsolved. The surrounding woods made it feel like one was always being watched, hence the story of the “Watcher in the Woods.” There have been reports of unknown shadows, ghosts, and strung out vagrants inhabiting the premises. After being demolished, it was rebuilt as an ICE detention center, further fueling the legacy of spooky government conspiracies.

So the Krome Insane Asylum was never actually an insane asylum, but a Cold War base and missile silo, built in response to the Cuban Missile Crisis. The base was part of Project Nike, the first fully operational anti-aircraft missile system. The Soviets, using Cuba as a base, threatened to bomb the US  in a tense standoff. The Krome facility was officially known as Nike Missile IFC Site HM-95 D Battery, and was part of America’s response to what could have been a massive disaster. There were other Nike missile bases around Miami, but this one became the most well known because HM-95 was relatively close to the city. The other bases were located deep in the Everglades, and some are still being used for military purposes. Luckily, the Cuban Missile Crisis never escalated, and the Nike missiles never had to be launched. The base was decommissioned in 1979 as the Soviets became less of a threat to the United States.

Enter the tumultuous 1980s. Between the Mariel Boatlift and the increase in Haitian refugees, refugee camps and tent cities were sprouting up all over South Florida. Makeshift camps grew under highways and vacant lots all around the city. Residents were getting antsy. Local and state governments had to make room for the massive influx of new immigrants. In 1980, part of the defunct missile silo was repurposed to house the influx of immigrants and refugees, housing mostly Haitian refugees. The camp was notorious for its inhumane treatment of the migrants, and the squalid conditions they were kept in made headlines. The stories of mistreatment and abuse brought protests from the Haitian community and human rights groups. There were stories of murders, suicides, and riots, which would ultimately give rise to the belief that the building was an insane asylum. Despite the horrid conditions, the camp had some amenities, like a gym, arts and crafts rooms, and even had English classes. The camp was closed down after it sustained damage from Hurricane Andrew in 1992.

A part of the facility was also repurposed as a CIA communications center. In conjunction with other sites and former Nike missile silos around the Miami area, the CIA and US Army relayed messages to and from the Caribbean and South America, probably to support their network of spies in the region. When the site was decommissioned after Hurricane Andrew, the CIA stripped the facility, making sure to not leave any of their highly classified documents and technology behind.

After the Krome Insane Asylum was abandoned, it fell into disrepair. During the early 2000s the Asylum became an urban legend for the locals. The younger generations weren’t aware of its history as a refugee camp, and even fewer knew about the missile silos. Rumors spread that it was an old insane asylum, leading to the name. The Krome Asylum became a hotspot for teenagers, graffiti artists, and paintballers looking to have fun. Over time, the building became plastered with graffiti, attracting urban explorers and photographers. Nearby, Krome Avenue was a popular drag racing spot, so the Asylum served as a secondary attraction for spectators. Danger lurked here as well. Local gun nuts and hunters often went to the Krome Asylum to fire off their weapons. Visitors often noticed that the ground was littered with expired bullet casings and shotgun shells, further adding to the thrill. In 2013, a body was found near the facility, a murder that remains unsolved to this day. Rumors swirled about the Krome Asylum also being a place for gang murders and initiation rituals. Others said the Asylum was a dumping ground for dead bodies. Because of the isolation and proximity to the Everglades, the legends just might be true.

Legend of the Krome Insane Asylum

Due to its isolation and history as a government facility, few people knew what the Krome Insane Asylum was actually used for while in operation. The building was laid out like barracks, with long hallways and small rooms, leading many to believe that it was once an insane asylum.

According to urban legends, the facility housed the mentally ill. One of the patients managed to start a fire, burning down the building and killing all the patients and staff.

Until recently, not many people knew the actual history of the building. The riots from the days as a refugee camp probably fueled the rumors of there being a fire. Abandoned insane asylums are also popular haunted hangouts, so the legend was most likely an educated guess. Despite the fact that it was never an insane asylum at all, the building is still known as the Krome Insane Asylum among Miami residents familiar with the place.

Visitors to the Krome Insane Asylum have reported ghosts in the area. A woman wearing an all-white dress has been seen on numerous occasions. The woman was allegedly a patient of the Asylum while it was operational, and some have even been approached by the woman, who walks around the Asylum grounds asking for help.

Another sighting is based on the legend of a man who took his child to the abandoned Asylum and butchered him to death. Though the story hasn’t been corroborated, multiple visitors have said that they’ve been chased off the property by a machete wielding man wearing a black bandanna. The man is said to be the ghost of the father who killed his child, still grieving over what he’d done.

Some say that the Krome Asylum was also a secret detention center for Korean spies. They say that because this was a heavily guarded secret, any and all information pertaining to this has been covered up. Based on the history of its use by the CIA and Immigration officials, there is a possibility that there is some truth to this legend.

Watcher in the Woods

The woods surrounding the Krome Insane Asylum are a source of mystery for the visitors. Many report feelings of being watched from the forests, hence the legend of the “Watcher in the Woods.” No one knows who’s doing the watching. Maybe it’s the ghosts of the mental patients who died in the fire. Maybe the US Government was conducting surveillance on the premises. Or maybe it’s just a few homeless vagrants watching from afar. Either way, most visitors to the Krome Insane Asylum can’t shake the feeling that they’re being watched, especially at night.

The Krome Insane Asylum was torn down in 2015, making room for the Krome North Processing Center, an ICE detention center that acts as a holding place for immigrants awaiting deportation. The controversial nature of ICE detention centers, with allegations of abuse, family separations, and forced hysterectomies, will only add fuel to the urban legends and conspiracy theories surrounding the area.

Although Miami’s known for its sunny beaches, nightlife, and Latin culture, the city is home to a number of haunted locations. The city’s rich cultural history and its reputation as a melting pot have spawned numerous urban legends. Between the illicit drug trade in the 80s and being home to high-class socialites, kingpins, and gangsters, Miami’s glamorous but bloody history gives the city a unique class of haunted ghost stories.

Read about Miami’s top ten most haunted spots here. Or read about famous haunted Miami landmarks like the Versace Mansion, also known as the Villa Casa Casuarina. The bizarre Coral Castle is also worth a visit, and is often called Miami’s Stonehenge. You should also check out the top ten most haunted places in Florida, if you want to get a look at the Sunshine State’s darkest secrets.