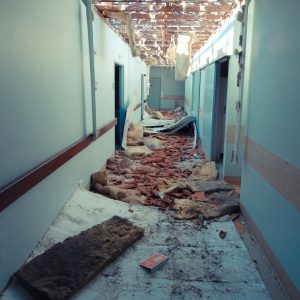 Overlooking the Golden Glades Interchange is one of Miami’s most well-known eyesores. Parkway West Regional Medical Center was formerly a hospital but has long since been abandoned. The gray 11-story building towers over the city streets of Miami Gardens and North Miami Beach, bearing down on the city’s residents with its bland concrete exterior and vulgar graffiti. The hospital first opened in 1974, and contained several operating rooms, a morgue, and a psychiatric ward on the 7th floor. The morgue was in the basement, which today is one of the most haunted parts of the building. Visitors who enter the basement report hearing strange noises, feelings of being watched, and a horrible stench that has a hint of rotting flesh. During the building’s operation, a patient from the psych ward murdered their psychiatrist. The psych ward is another haunted area of the building, where visitors report seeing ghosts and shadow people. The second-floor operating rooms are also haunted by the ghost of a mother who died during childbirth. The hospital was abandoned in 2002 and has since become derelict. The windows have been removed, leaving the rooms wide open. Pieces of metal and concrete hang from the ceiling, posing a hazard to trespassers. The building usually attracts graffiti writers, urban explorers, and ghost hunters, although the underbelly of society has been known to hang out here as well. Vagrants have been known to make a home here, and some say that drug dealers and murderers have left behind numerous bodies in the basement. The building served as a hideout for a machete-wielding murderer in 2019, and he’s still on the loose. In 2020, a man fell to his death inside the former hospital while exploring the building with his friends.

Parkway West Regional Medical Center was completed in 1974. At the time, the hospital was considered a state-of-the-art medical facility. It had 127 rooms and was able to hold about 300 patients. The hospital had its own morgue, which was located in the basement. The second and third floors held the operating and emergency rooms. The seventh floor held the psychiatric ward. The hospital was designed to use Miami’s climate to its advantage. The rooms had big windows to let in the sunlight and fresh air, as well as balconies for patients to escape the hospital room and enjoy the warm climate.

Parkway West remained in operation until it closed its doors in 2002. The building was bought and sold by several property owners thereafter. They planned to renovate it into a hotel, but the plans fell through. Another developer had plans to turn the building into luxury apartments and condos, but that also didn’t make it past the planning stage. The building has amassed over $2 million in liens, though the building does provide some revenue as police are constantly nabbing trespassers. County and city officials have promised to demolish the building on numerous occasions in response to the constant outcry from the local community, but that promise has yet to be fulfilled.

After Parkway West closed down, the building was left to rot. It became a haven for graffiti artists, vagrants, urban explorers, and teenagers looking for a place to hang. The graffiti is visible from the outside, and the building made headlines when a few raucous teenagers wrote some obscene messages on the exterior. Ghost hunters also flock to the building, often risking their lives to catch a glimpse of a ghost. There are numerous stories of gangsters, drug dealers, and murderers using Parkway West as a place to commit murder, rape, or leave behind dead bodies. Some claim to have encountered crazed drug addicts hiding in its dark rooms. While there are only a few confirmed stories of this nature, the building is located in a neighborhood known for its high crime rate, which fuels the fears of any would-be visitors.

Even without any murderers or drug addicts, Parkway West is still an extremely dangerous place. Unless you’re near the roof or balconies, it’s extremely dark. Upon entry, one notices the piles of concrete and scrap metal. Metal rods and tiles hang from the ceiling, and sometimes they fall off. There are massive holes in the walls. There’s no glass on the windows, so the wind blows right through the building. Doors will fly open or slam closed when there are heavy gusts of wind. The elevator shafts are wide open and the stairwell is unguarded. Visitors who are ill-prepared or inattentive can easily fall to their deaths, and at least one person has been confirmed to have fallen down the stairwell.

Ghosts and Death at Parkway West

Parkway West is haunted. You’d be hard-pressed to find an abandoned hospital that isn’t. Parkway West in particular had a morgue and a psych ward, which along with the emergency rooms, are the most haunted areas in the building. Although, visitors have reported seeing shadows and hearing strange noises all over the building. The wind often causes hanging ceiling tiles and open doors to slam against the walls, giving visitors an extra scare. Many have also had the strange sensation of being watched. The dark rooms and holes in the walls give would-be lurkers plenty of places to hide and peer in on trespassing visitors.

The second floor was home to the operating and emergency rooms. While the hospital was still open, a woman was having complications during childbirth and was moved to the emergency room. She had her baby, but the doctors couldn’t save her. Many visitors have seen her ghost walking around the second floor looking for her child. She’s often seen wearing a hospital gown, aimlessly walking through the piles of rubble. The woman seems to be oblivious to visitors when she’s spotted.

In 1998, a man who had been admitted to the psych ward at Parkway West somehow procured a firearm and shot his psychiatrist twice in the chest. She died after being airlifted to another hospital. He attempted to escape and shot at anyone who tried to catch him. The patient was eventually subdued, but not before shooting and injuring another person. To this day, nobody knows why he shot his doctor, or how he got a gun into the psych ward in the first place. Visitors often report seeing shadow people on the seventh floor, and the echo of gunfire and blood-curdling screams can sometimes be heard in the distance.

In 2019, a man in Miami Gardens brutally murdered his wife and 10-year-old daughter with a machete. He butchered their bodies to pieces after his wife threatened him with divorce. He also attacked his other daughter, who luckily survived the attack. Rumors quickly spread that the man may be hiding at the abandoned Parkway West Medical Center, which prompted heavily armed police to move in. They scoured the building, but to no avail, the machete-wielding murderer had already escaped. Many say that he ran away to his native Jamaica, where he was known as “Massive.” The story gained national news, and many say that lunatics like Massive often use the building as a hideout or place to dump bodies. That would explain the horrible smell in the basement.

In 2020, a 21-year old man was exploring the former hospital with 3 of his friends. When they were on the higher floors, he walked away to answer a phone call. His friends say they heard a loud bang shortly after he walked away. It turns out that the man stepped into the dark stairwell to answer his phone call, and not seeing the hole in the middle of the stairwell, he plunged hundreds of feet to his death. His phone was found on one floor, his shoes on another, and his body several feet below that.

Miami is one of the youngest major cities in the US. But yet, during its short history, the city has seen devastating hurricanes, cocaine cowboys, and high-profile assassinations. Ghosts and spirits have found a home in this tropical paradise. Check out the haunted Villa Casuarina, also known as the Versace Mansion, the site of Gianni Versace’s murder. You should also pay a visit to Coral Castle, also known as Florida’s Stonehenge. If you like abandoned buildings, then read about the creepy Krome Insane Asylum, a former nuclear missile silo in the Everglades. You can also read up on the top ten most haunted spots in Miami right here!