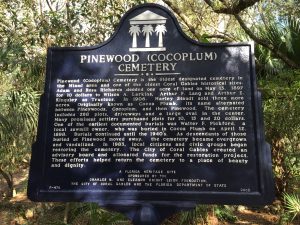 So, let’s get back into the van and skedaddle into the spectral filled nightmare road off hauntings. If you’ve been with me so far, you’re by now aware that Miami is basically a mess… I a supernatural kind of way. It’s a topsy turvy joint where the dead come to party and the police basically have no say so in the matter. And, here’s the clincher, we’re just talking about some places and mainly focusing on spooks. We’re skating by the South Beach and all it’s hauntings and not even touching on the multiple mass burial sites littered around the place; each time a hurricane barged through the area, way back in the beginning of the 20th century, locals would just scoop the dead and tossed them into collective ditches.

Florida, you have to understand was backwoods country. While in New York and Washington and Chicago and basically all those great metropolis people were going to the opera and marveling at the power of electricity, Florida was a frontiers land of muck and crazy outlaws.

And, in Miami’s case, some of those outlaw tales and criminal stories lead straight into an early grave. We’re going to dive right into such a tale. One of woe, tragedy, heartache, and grief. A story that ultimately spawned phantoms and ghosts. The story of Dora Suggs

First a history of the Pinewood Cemetery.

Located in the City of Coral Gables, right on Erwing Road south of Sunset Drive, Pinewood is one of the oldest cemeteries in Miami. This is the place where most of the pioneers that made Miami what it is and set up the Dade County are buried.

This was a rural cemetery, it was a small shady place under some trees that didn’t exactly conform to the norms of what a standard cemetery should have been. There were no undertakers, no hallowed ground, no well-kept document on how many were entered theirs. You simply croaked, your close ones would nail you into a pine box and push you into a grave.

The less than accurate and rather flimsy records they did keep a record that approximately 200 people are buried on the spot. Most of these records come from word of mouth and were later recorded by residents who heard it from a friend who heard it form another and well, you get the drift.

The place is so old and has such a link to the history of Miami that it wasn’t originally called Pinewood, instead, it was simply a small family burial plot called The Larkins Cemetery. The Larkins were the original settlers of South Miami; the pioneering, wagon wheeled, family and friends that decided to breach out into the State and make a living for themselves among the gators and less than jovial Indians.

Over time the cemetery expanded and it changed its name from Larkins to Cocoplum and finally to Pinewood. A stroll down the cemetery reads like a catalog filled with the who’s who of South Miami’s forefathers. Among them are the burial sites of families like The Barrs, The Combs, The Munroe, The Perry, The Plummer, The Walkers and dozens more. Each one of these also has a street or a country named after them.

The last known burial in Pinewood took place in the middle of the 1940s. Then, for a period of its history, the place was deserted and abandoned. Vegetation took hold of the land and basically covered most of the graves. Wild animals started to burrow into the tombstones. Vandals desecrated the cemetery making off with markers and breaking headstones.

In 1983, a group of citizens – bonkers for history, genealogy and Floridian lore – spearheaded a campaign to not only protect the significant spot but to restore the cemetery to its former glory. With the help and backing of the City Of Coral Gables, they managed to create an advisory board and later drum up some funds for the project.

The place was finally given a new coat of paint and cleaned. Nonetheless, like the Miami Cemetery, the place has a rather spotty reputation of attracting the odd duck. The kind of odd duck who needs chicken innards to commune with their Gods.

“We’ve found all manner of weird religious artifacts in the cemetery. From drug parties. To even midnight burials – people coming inside and trying to bury their pets. And, more than once, we’ve stumbled onto headless chickens and animal sacrifices.”

The Murder Of Dora Suggs.

One of the many, many ghosts that haunt this place is the spirit of Dora Suggs.

She is a perfect example of some of the hardships and tribulations the first pioneers of Miami had to deal with.

Dora Suggs, 33 years-old, mother of two, was doing her chores and basically going about her normal everyday existence in December 1905. She left her farm, climbed on a mule-drawn wagon and started heading into town for groceries and supplies.

A couple of hours passed by and when her husband started to worry, a search party was created. They found the wagon a couple of miles from the family home. It took them more than 3 days of retracing Dora’s steeps and trying to get a handle of where she might have gone off to. A small splinter ground decided to investigate a narrow and overgrown stretch of road known as The Devil’s Den. The place had a rather insidious reputation and few if any dared to enter it.

Dora0s body was found a couple of meters inside Devil’s Den. Brush had been used to cover her mangled remains. Her corpse had swelled up on account of the Miami heat and animals were already tearing her apart. When the police were called in, they were horrified by what they discovered. Dora had been beaten, then savagely raped, then while she was struggling to get help, her attacker picked up a large rock and cracked her skull in. 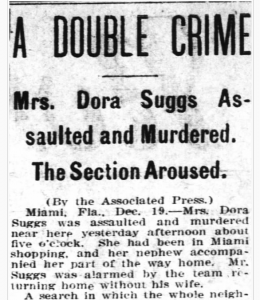 The story of Dora’s murder made headlines news and it was picked up by the wire. It became a national sensation and reached the startled masses as far away as Washington D.C. The nation was stunned and every law enforcer in the land started investigating Dora’s death. In March 1906, after an interrogation, a mand named Edward “Cady” Brown confessed to the deed. He was found guilty and sentenced to death. By June of 1906, “Cady” was hanging off a tree and on an elevator going way WAYYYY down.

Dora, as you might expect given that rather odious sendoff, is one of the most pervasive ghosts in the area. Her figure has been seen waiting around her grave, either sitting on it or floating in the nearby soil. People who have seen her constantly claim that she emanates despair.

“The consensus of some was that Cady wasn’t her killer, just a patsy. The local police were getting a lot of press concerning the murder and they needed a scapegoat. Cady sort of fell into their laps. His trial was fast and his execution equally as fast. Rumors point to an estranged lover or her very own husband. There are some inconsistencies in her case.”

Dora haunts the area, maybe reliving her murder over and over again, or maybe, just maybe, looking for some justice.

“I was once in the cemetery walking my dog. Real early in the morning, when I saw this lady in dark gown just strolling through the graves. Real suspicious, there was something odd about her. When I tried to catch up to her, she dodged behind a tree and simply disappeared. I remembered I stayed near the exit just waiting to see if she’d come out. She never exited the cemetery. When I asked the guards they just had a laugh and told be it was the ghost of Dora Suggs. ‘Don’t mind her. She’s part of the family.’”

Have a look at these other spooky ghost tours around the U.S.