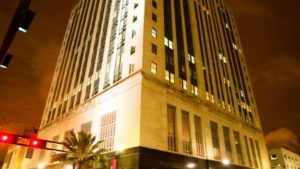 Miami, like all great cities, has a love affair with skyscrapers. They just love their phallic symbols. When the State was being developed and the gators were being beaten back with a stick, every tycoon and a big shot in the Country wanted a piece of Miami.

The city had a reputation. It had a reputation not only for its strategic importance, from Miami, South America was but hop or two but also because of its frenetic energy. Miami was always wild. So, after Deering, Flagler and a dozen of other diamond incrusted millionaires started gobbling up real estate like the Monopoly man, Miami sort of began the bargaining chip and talisman of the rich and famous.

If you had the dough, then you needed a place in Miami. Not only that but on account of its lowlife residence and mafia connections, Miami was sort of like the no-man’s land for all the nasty shenanigans the rich are prone to.

One of the 1% that looked at Miami like a jewel he needed for his crown was Alfred Irénée du Pont. Industrialist, financier, philanthropist and basically one of the most influential members of the legendary DuPont Family; a cabal of prominent Americans that had their fingers in every pie.

Alfred DuPont rose to his high seat in that council of world movers thanks to his work in his family’s gunpowder manufacturing plant. The kid took over the small Delaware based factory and made it after a few interesting deals into a gold mine.

A few bad business transactions, a lawsuit or two and a couple of wives, and by 1920, DuPont was basically bankrupt. Not only that, but due to a small accident, the fellow was missing an eye and was deaf.

Then, cause bankruptcy for the rich is simply a small set-back, DuPont so how pulled himself up by his bootstraps and snapped back into shape. He no longer had the backing of his family, he had a rather acrimonious fall-out with some of the members, but he still had a savvy nature. And two big things in his favor… The Great Depression and the 1926 Florida Hurricane.

These two events helped Alfred rebuilt his fortune. He bought cheap and later sold high. One of the places he started investing heavily was in Florida. First as a land monger, then as a banker.

By the early 1930s’ DuPont had set up Florida National Bank and by 1937, he was already building the iconic Alfred I. Dupont Building.

Here’s a cheat sheet of the building. 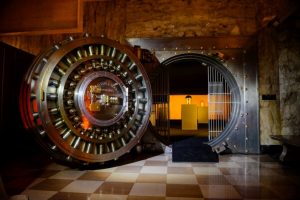 The Hauntings at Alfred DuPont Building.

Because of its rich history, and quite frankly old, The Alfred DuPont Building has a couple of stories to tell. Most in general having with the ins and outs of the corporate roulette wheel. Financiers making a profit, backroom deals, and the general cut-throat dealings expected in a bank.

But, one particular tale, really raises the bar and slips into Law And Order territory. That’s the story of Grant Stockdale.

Grant Stockdale was born on July 31st, 1915, in Greenville, Mississippi. His life really kicked into high gear when he started to attend the University of Miami. In what could only be described as a shooting star kind of lateral move, Stockdale began a varsity football star, graduated with a Business Administration degree, became the manager of a Venetian blind’s company, worked in Real_estate, was elected President of the Miami Junior Chamber of Commerce, and served as a Marine during World War II.

Then, when he helped elect his friend George Smathers to Congress in 1946, that’s when people started to see the political cache Stockdale had between his teeth. Stockdale to play the political game a bit more in your face. And, in doing so, he started amass enemies. He made enemies of various governors, introduced the first anti-Ku Klux-Klan legislation in the Southern States.

“That’s when he started getting death threats. People used to phone him up and say: ‘leave this thing alone or you’ll be sorry’… And those were the ones I can politely talk about.”

He then rejected support for a bill offered by the Communist-dominated Miami Civil Rights Congress. He then, after that coup, supported legislation to increase criminal penalties for child molestation.

“Most people were ecstatic with him… But he was rubbing powerful people the wrong way.”

After meeting and befriending a young Congressman in 1949, by the name of John F. Kennedy, Stockdale went and staged a revolt against Dade County Commission’s practice of conducting closed-door meetings.

When Kennedy won the presidency, he made Stockdale the US Ambassador to Ireland. The Senate confirmed the appointment and Stockdale served from May 17, 1961.
Then, Dallas hit home. An assassin shot President Kennedy on the 22nd of November 1963. Stockdale fell into a deep depression. His friendship with Kennedy had blossomed over the years.
“He was disconsolate to the point where he couldn’t get a word out.”

And here’s where things get a bit fuzzy and the DuPont Building comes in.

Ten days after Kennedy’s funeral at Arlington, on December the 2nd, Stockdale feel from the 13th Floor of the DuPont Building.

No suicide note was found. Officially it’s been labeled a suicide.

“People, the type you don’t want to upset, knew he was coming to town. Back in the 60s’ Miami was a bit of a lawless town. The mafia ran everything. And everybody was on the take. Let’s just say that when Stockdale ‘fell’ some folks threw a party.”

With that history, I’ll give you one guess at which ghost supposedly haunts the DuPont Building. On the 13th floor of DuPont people often see the specter of Stockdale. The staff of the building is well aware of the ghost presence.

“If you’re getting a job at DuPont, the first day in, they give you the rundown on Stockdale. If you happen to see hi, which eventually you do, it’s considered a rite of passage.”

Paranormal investigators have flocked to the scene on numerous occasions, among them, Marlene Pellicer to try to capture or record the phantom. Pellicer says she and another lady in the room Stockdale fell out of had an unusual feeling.

“And it’s not just Stockdale’s ghost, although he’s the most pervasive and iconic.. there are other phantoms. Some cleaning ladies have reported seeing a man and woman vanishing into thin air. A technician repairing and air-conditioning unit on the second floor said that when he opened the unit, he saw a badly burnt face that soon disappeared. There’s actually a report of the incident on file at the DuPont.”

For more check out our Ghost Tours in Miami area and other hauntings of Miami.

Florida is a strange place. From the blend of Latin, Caribbean, and Southern cultures, to the weird tales of Florida Man, we've learned to expect anything and everything from the so-called Sunshine St...
Read More