The Betsy Hotel once called the Betsy Ross, is nothing short than a postcard of one of Miami’s lest known Eras. It is a statue of an epoch about our American spirit and our will to persevere and kicks some butt. The place might as well have a sign over one arch telling our enemies, abroad and domestic:

“If you fling mud at our eyes! We’ll come at you with everything!”

Well, yes, it’s a rather long-winded battle cry, not exactly:

But it gets the job done.

Way back, when the 20th century was getting its legs underneath itself and starting to shrug off the growing pains of the whammy that was WWI and the roaring 20s and the teenage angst of blowing all your dough on fast cars – The Great Depression – Miami was the promised land.

The History Of The Betsy Hotel. 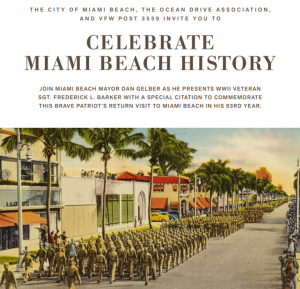 The 20s and the 30s was a time of growth for Miami – there was that whole bit about the stock market going kaboom and the Depression, but once Roosevelt flew into office, the kerfuffle was cleared up. Anyway, by the time the 40s hit the town, Miami – and more to the point South Beach – was building hotels on every corner. Each and everyone is trying to beat the competition. One of those places was the Betsy Ross.

The owners of the future Betsy started to break ground and steamroll a patriotic product launch down everyone’s throat. The propaganda was clearly meant to evoke the former military glory of the States. Red, white and blue insignia, buzzword idioms, a recollection of the Revolutionary War, and how England went back home with its tail between its legs; The ads had it all.

The pitch hit the press, and nationwide the Yellow Rags picked up the story and started feeding a fevered public – hungry for the exploits streaming in from over the pond in Europe – their gunpowder laced spoonful. The Betsy Ross became the nation’s sweat-heart.

Everything was going smoothly, on greased wheels, the public enamored of the Betsy’s brand and air, when out of the blue, the Japs’ decided to sucker punch us.

Overnight the war department went into panic mode, and Florida became a strategic point for the war effort to come. Florida was conscripted into the caca that was hitting the nation, and the State had no choice but to trade in her swimsuit for olive green drabs and military boots. And the State was damn proud of it!

Why Miami Is So Strategically Important.

A couple of months after the four-column portico of the Besty Ross opened to a clamoring fanfare, Uncle Sam went and seized the place as a logistical point for the war effort.

Florida has always been a strategic point for every military action that the USA has undertaken. Why?

And, back when the Betsy opened up, the military saw two other reasons why Miami – mostly – was Da Bomb’ for storing their soldiers. You can ship large scores and regiments from various points in the States thanks to Florida’s booming rails system. Train folks in New York, drop-kick them on a train, push them into a ship; rinse and repeat.

The second reason, and why The Betsy is a cavalcade of ghosts, lies mostly with feisty troops, about to go out and defend their nation, broiling with savage oats. Attitudes needed to be high, and depression was one of the biggest problems the military was facing back then.

“Have you seen Miami Beach? What serviceman wouldn’t want an all-expenses-paid vacation to that place before lining up to duke it out with those coked-out Krauts?”

The big wigs went into a meeting with the POTUS, gave him the pitch, and then dropped the mic’ when they got a round of applause for their efforts.

Alcohol, happening nightspots, ragtime joints, tequila and cigar swinging señoritas from the south, and XOs that were a bit wet behind the ears following their superior’s orders of: “let them blow off some steam.”

In a week, South Beach became Las Vegas but with rowdy soldiers – most going to the Western Front – flooding the streets. Pandemonium times a hundred.

And where was the Betsy in all of this?

The Betsy was ground zero.

The Betsy, the luxurious, recently inaugurated hotel, was hijacked into becoming a faux barracks and military hospital and administrative building and command post and, well, just about everything the officers back then needed.

“There are photos of wild parties, servicemen walking the grounds with their helmets on and nothing else, girls of every nation showing the guys how ‘appreciative’ they were of their sacrifices. There were communications of XO’s actually dealing with mobsters for more booze and entertainment.”

The place was a pig-sty by the time Uncle Sam handed her back to her owners. And, more importantly, it had by then amassed scores of sudden deaths.

“You have to remember; these young Turks knew that they were probably going to die. The news coming from the Front painted the Nazi as one of the most competent forces the US had ever dealt with. The Nazis were boogeymen who would sleep, marched 24/7, had superior firepower, and would storm into a town and decimate the enemy in a flash. They practically invented the word Blitzkrieg.”

With that dooming vision tunneling towards them, the thousands of troops really didn’t have much in the way of caution.

“Some died in bar brawls or lover’s spat gone wrong. Some crossed the mob and simply disappeared. Even a report of three died in a poker argument in an actual Mexican Standoff with itchy triggers. But, the most common way they went was by suicide. They were mostly just scared kids, and when it was time to deploy, some would find a rifle and end it all.”

The Besty, and the area that surrounds it is full of restless spirits. People who have stayed in the Besty have felt leather boots marching up and down the hallways in the middle of the night; mind you, people that have no idea of the hotel’s shadowy past. The after-hours staff has been taught to ignore doors that slam on their own, pay no attention bizarre stench of cigars, and try to ignore the continued pokes and nudges they might feel as they travel down some of the renovated sections.

One of the more common phenomena is encountering stacks of coins or stones – inexplicably – appearing just before dawn under one of the hotel’s many ground floor entrances and full-length windows.

The South Beach Police Department has documented some of the more macabre signs of ghostly inhabitants. The police barging into the lobby regularly; patrons of the spot or passersby reporting a loud bang: “like a gunshot round, but louder…” Remember those suicides? Most were committed by a semi-automatic Garand Rifle.