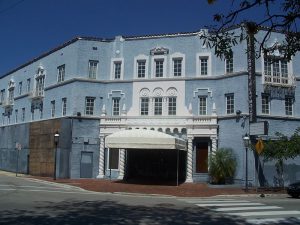 There’s always been a sort of connective tissue between the dead and the arts. The ethereal nature of one mixing with the spirits of the supernatural. The Greeks calling on ghosts and muses for inspiration. The French Bohemians downing gut-wrenching quantities of absinthe in search of the “green fairy.” Sir Arthur Conan Doyle, doctor, and man of letters roaming the countryside for sprites, goblins and the Fae.

Arts and the supernatural go hand in hand… like peanut butter and chocolate or bacon with… well… bacon goes great with everything, bacon and cheese are the glue that holds the center and society together. Anyway, back from that tangent, arts and the supernatural will always be linked. Why? Cause their circles overlap on an intersection called Locos Banana Avenue and bat-s@&t crazy street.

With that little intro in place and you no doubt cranking up the cast recording of The Phantom Of The Opera, let’s dish on The Hauntings at Coconut Grove Playhouse.

This grand old theater, now nothing more than a bombed-out shelter of its former self – mind you, I use the term “bombed” in the broadest sense. Here In Miami, bombed just means that the 80s really did a number on you. Well, back to the program. As I was pontificating, this theater opened its doors in the trendy neighborhood of Coconut Grove on January 3, 1927. Back in the roaring 20s, Miami was cashing in the big bucks. Neighborhood happening places were on the bloom and every time one got too small to cater to the armies of Mojito and Martini enthusiasts another one would simply pop up to scoop up the leftovers and pick up the slack.

Miami had the sun, the booze, and the mafia… it was a madhouse. Word of mouth got out, and back north, during those freezing months were alcoholism became a form of depression prevention, the birds perked up and went:

The snowbirds backed their Hawaiian shirts and did a V formation down south.

The Paramount chain saw a market and opened a movie theater. The place crafted by the architect Richard Kiehnel of Kiehnel and Elliott. The day it opened up, the street ran amber with rum.

During a period of its existence, the theater was universally known through the whole Peninsula.  the big draw was that it was the second movie theater of the east coast of Florida to have to air-condition. If you’ve ever gone to South Florida, this trait was more coveted than a goose who lays golden eggs.

The place was hot, in a temperature control kind of way, and during 30 or so years it hosted premiers, galas, weddings, and government affairs.

In the 50s after oil baron George Engle bought the building, the place started to focus mostly on live performances. He dedicated the equivalent of 47 million dollars in today’s rate on renovations and marketing. Over the next 50 years, until it closed in 2006, the theater hosted some of the most renowned performers out there, legend unto themselves. Folks like, Maureen Stapleton, Hume Cronyn, Jessica Tandy, Eve Arden, Tallulah Bankhead, Carol Channing, Liza Minnelli, Linda Lavin, Bea Arthur, George C. Scott, Colleen Dewhurst, Ethel Merman, and Raúl Esparza.

The place was so sought out, that on November 22, 1996, The Late Show with David Letterman actually originated from inside the playhouse. It was the last episode of the show not shot in New York.

Then, after harboring the elite, the decadent, the top dogs of Miami, the socialites, the narcos and basically the usual suspects of Miami glitterati and business, the place close shop. Why? The Cheese Cake Factory!

Yup, Coconut Grove lost some of its glamor and glitz and things started – no matter how many CocoWalks entrepreneurs opened up – to go downhill. Dive bars became a thing, and Starbucks gentrified the place to such an extreme that it looked like any other street corner in America.

The owners of the Playhouse began hemorrhaging money and racking up a staggering debt. By then, the place had become a National Historic joint, one of those that Washington gives a fancy registry number to. The owners, behind the bureaucratic eight-ball – can’t sell the land for real-estate or to Five Guys – decided to cut their losses and simply went and nailed the windows shut and clamped the doors with a padlock. Over the passing years, the facade and interior withered, Miami’s clawing heat and its intrepid wildlife gutted and desiccated the spot.

It became that house on the street high school kids dare each other to enter and spend the night. The one that inspires the likes of Ryan Murphy to crank out yet another season of American Horror Stories. That’s the epoch that the Rumors started making headway.

“…this building has a somewhat negative energy line. If you look to the third-floor windows, you’ll see the curtains flow in an unnatural way. That’s ectoplasm.”

And that’s just the tip of the iceberg as far as the playhouse spooks are concerned. As the years flew by, the place became the ghost equivalent of a crack binge. Stories started hitting the press.

“It was like the place had gotten a taste of something and now it had fangs. Urban legends started forming from the playhouse and a loop of sorts began to permeate the area. Kids would dare each other to go inside on a full moon, and then they’d come out swearing they felt something, saw something or were just afraid. You have to understand that this is part of the fun of a haunted house. It’s not so much that it’s really haunted but that you want it to be haunted. If you want the curtains to move, they will move.”

The rumors made the round and the place started pulling in the unsavory types. The sort of miscreants who want to feed off the supernatural. Voodoo priests and priestess of the black barged into the abandoned locale and set up shop. On certain nights you could hear people inside, chanting or hollering. When the police would come they would either have to chase a party of sorcerers away- claiming their right to practice their religious beliefs – or call animal control on account of sacrifices.

Then it got even weirder.

“It wasn’t just voodoo practitioners, but just about everyone under the spectrum of the macabre. Biker gangs barging in and practicing sex magic, and getting stoned. Satanist drawing symbols on the floor and spilling animal blood. Santeria magicians putting up idols and offerings to their saints. It really became a hotspot for fringe denominations and religions. It was so insane that sometimes groups would stumble onto each other and they’d have to wait in line to do their thing.”

The more magical energy the playhouses received the greater the hauntings. People started to claim that the place might as well be called a Hellmouth. Inside people have seen shadows that ink out from cracks in the walls and objects disappear. Wails coming from below the floors. Objects that fly off into different directions as if tossed by someone. Cold spots just about everywhere.

“Once, a group of kids stayed inside as a dare. They set up camp and actually tried to sleep in the place. It was a group of 6. Halfway through the night, around 3 A.M, locals just saw them bolt like mad out the playhouse. They left their stuff, camping gear, food, everything. The cops tracked them down and charged then with breaking and entering. When they were being interrogated they all gave more or less the same description on events and why they ran off in such a hurry. Something woke them up in the night. They all looked up and say a hunched back, white creature, red eyes, and scally skin, in the corner of the room. The creature then scuttled towards one of their sleeping bags and tried to pull the bag, with one of the girls inside, into a shadow. They managed to snatch the girl out and made a dash out the doors.”

The police later went into the playhouse, the found all the kids’ gear and a torn sleeping bag; the bottom half gauged by claw marks.

For more check out our Ghost Tours in Miami area and other hauntings of Miami.