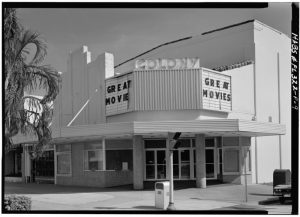 Lincoln Road is the heart of Miami Beach. The pedestrian-only shopping district brings over eight million visitors a year. One of the oldest buildings on Lincoln Road is the historic Colony Theatre. Built in 1935, the Art Deco style theatre has been entertaining the arts scene in Miami Beach for almost 100 years, and they have yet to go on hiatus. The theatre was originally a Paramount Pictures movie house, where they showed classic films like The Sound of Music and Alfie. During the Second World War, soldiers were garrisoned on Miami Beach, and the Colony was used to show propaganda films and informational PSI to new recruits. In the 1950s the theatre transitioned to a live performance venue. Miami Beach took ownership of the Colony in 2006, and the city signed a check for a $6.5 million renovation. Today, the Colony is one of Miami’s best theatrical performance venues, but it hides a spooky secret…it’s haunted! Theatres are known haunted hotspots, and the Colony is no different. After almost a century of history, it’s almost impossible for the building to not have picked up a few ghosts along the way. At the Colony Theatre, the most commonly seen ghost isn’t a normal ghost. The spirit of a small white poodle haunts the building, chasing down and barking at guests. There’s also another unidentified spirit that roams the building, identifiable only by their footsteps. The invisible poltergeist likes to hang behind the main stage or the theatre lobby. They’re also known to hop on the elevator with unsuspecting guests, startling them with their phantom footsteps.

History of the Colony Theatre

During the 1930s, Miami Beach was reeling from the 1926 Miami Hurricane. The disaster cost the city over $100 million, leveling the city and putting an end to the Florida Land Boom. But Miami Beach held on. The city began rebuilding by propping up small Art Deco boutique hotels to attract tourists, many of which still line the streets today. The plan worked, as tourists continued to pour into the city, though it was significantly fewer than before the hurricane. In the midst of the Miami Beach Art Deco architectural renaissance, Paramount Pictures decided to take advantage of Miami’s budding art and movie scene. They built an Art Deco inspired movie house on Lincoln Road and Lenox Avenue.

The Colony Theatre was completed on January 25th, 1935. Movies were all the rage at the time, so the art-loving crowd on Miami Beach welcomed the Colony with open arms. The theatre originally sat 1,200 people, which to today’s theatre patrons, seems damn near impossible.

World War II broke out in the 1940s. Miami Beach was used to station troops and was home to the Army Air Force Training Command. Platoons marching the streets in formation was a common sight around town. The Colony Theatre played a role in their training, as the theatre was used to show informational films to large groups of soldiers.

After the war, the theatre transitioned to a live performance venue, though movies were still played there. The theatre underwent renovation in 1953, and was closed for two years. The Colony got a bigger stage, updated equipment, and more spacious seats at the expense of lower capacity. The theatre now only sat 894 people, but the guests enjoyed the extra legroom. In the 1960s, large swaths of Miami Beach were built up and renovated with Modernist architecture. The Art Deco facade on the Colony Theatre was replaced with a Modernist one.

The Colony began showing educational films and plays during the 70s, on behalf of a local non-profit called the Greater Miami Educational Cultural Series. The organization supplied the theatre with educational films from its vast library. The Colony was taken over by Miami City Ballet during the 80s, who used it as a space to showcase live performances. It wasn’t until 2006 that the Colony Theatre finally fell into the hands of the City of Miami Beach, who invested over $6 million to renovate the now historic theatre.

The renovations proved to be a success for the Colony Theatre. The building got back its original Art Deco facade. They also got a wider stage, state-of-the-art theatrical equipment, and the number of seats were cut in half to 417. The city continued to rent out the theatre to different acts until 2016, when Miami New Drama took over the operations of the theatre. Today, the Colony Theatre is often called “Miami’s Beauty Queen.”

Ghosts of the Colony Theatre

As the Colony Theatre nears its centennial, it would be foolhardy to expect that such an old establishment wouldn’t be haunted. According to the supernatural experts from the Miami Paranormal Society, renovations tend to awaken spirits, as the movement and construction disturb their natural setting. In the Colony Theatre, this coincides with the first ghost sightings taking place in the 1950s after the theatre’s first renovation.

The Colony’s most famous ghost is a poltergeist poodle. Nobody knows who the poodle belonged to while it was alive, we just know that it’s been stealing hearts for at least 60 years. They say the small white pooch doesn’t even know that it’s dead. The poodle runs around the halls freely, chasing guests with its high-pitched barking. Some guests have chased the dog down, only for it to disappear when they got too close. Though it’s unusual to see a ghost poodle running around, it’s not out of the ordinary for the high-class luxury lifestyles of Miami Beach, where even the ghosts have designer dogs.

A more frightening ghost is one that is a lot less visible, identifiable by their phantom footsteps. The spirit is usually heard walking around the main stage, often giving the theatre staff a good scare, though it mostly gets the newbies. Longtime staff are well acquainted with the theatre’s ghosts. The invisible spirit is also seen, or rather heard, walking around the second floor, as well as in the lobby near the entrance. It’s unknown if the ghost is mischievous, or just aloof, as it tends to walk right behind the guests, scaring them to high hell. It gets a really good scare when it gets on the elevator with the theatre patrons.

Nobody knows who the unknown ghost is, but there are theories. Some say it was a murder or suicide that happened nearby, while others say that it was an actor who just didn’t want to leave the theatre, even after death. Then there are rumors that the ghost was a wannabe who never made it on the theatre’s production crew, so they stayed hanging around the theatre hoping for their second chance. No matter what their reason for hanging out at the Colony Theatre, the ghost seems rather friendly, though startling. They may scare the guests, but the staff and production crew are rather fond of their phantom friend.

The ghost of a woman dressed in 1930s clothing has also been seen around the Colony Theatre. Like the other two ghosts, her origin is a mystery, the only clue being her outfit. She was most likely a patron from the early days back when the theatre was owned by Paramount. She could not have been a performer, as the theatre only hosted films at the time. Due to her outfit, many guests believe that she’s a part of the theatre crew, hanging around the lobby before a performance. It’s not until she mysteriously fades away that they realize that she’s actually a ghost.

Want to learn more about the haunted history of Miami?

Beyond the luxury, glamour, and high-class lifestyles of Miami Beach lies a violent and bloody history. From the days of drug-running gangsters, to celebrity assassinations, to devastating hurricanes, Miami has seen it all. Check out the Villa Casa Casuarina, also known as the Versace Mansion. This beautiful mansion was built during the heyday of Capone’s days in Miami Beach, and was the site of the grisly murder of Gianni Versace in 1997. Spend a night at the Betsy Hotel! The building was used as a military barracks during World War II, and the ghosts of the rowdy soldiers can still be heard hooting and hollering to this day. Pay a visit to the spooky Coral Castle down in Coral Gables. This strange landmark is often called Miami’s Stonehenge due to the bizarre stone artifacts that decorate the area. Ghosts, fairies, and even UFOs have been seen near Coral Castle. Before you take your next vacation, read up on the top ten most haunted spots in Miami!