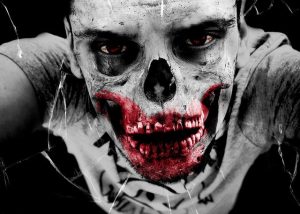 Florida is a strange place. From the blend of Latin, Caribbean, and Southern cultures, to the weird tales of Florida Man, we’ve learned to expect anything and everything from the so-called Sunshine State. But the summer of 2012 surpassed our expectations. Right off the MacArthur Causeway, a busy thoroughfare connecting Downtown to Miami Beach, a grisly scene unfolded that rocked the nation and made headlines all over the world. This was the site of the infamous Miami Zombie Attack, where the city saw its first instance of cannibalism… that we know of. When it comes to Miami, we don’t rule anything out. Rudy Eugene just wanted to hang out on South Beach, but somewhere between his car breaking down and losing his bible, he had a psychotic breakdown and unleashed his anger by chomping down on a poor homeless man named Ronald Poppo. Eugene savagely beat Mr. Poppo and bit chunks of his face off, even chewing his eyes out in the process. Eugene continued his drug-fueled feast until Miami Dade Police arrived almost 20 minutes later. Eugene was shot dead by police, but not before Ronald lost 75% of his face, including both of his eyes. The craziest part of the incident; Eugene was completely naked when he attacked Poppo. A strange sight indeed. A naked zombie eating a man’s face. But then again, this is Miami.

It was Memorial Weekend in Miami. That means parties, live rap concerts, and tons of drugs and alcohol. Rudy Eugene was on his way to the festivities when his customized purple Chevy Caprice gave out on the MacArthur Causeway, only a few miles from the lively scene on Miami Beach. Cursing his vehicle, Rudy hung out with his car for about half an hour, hoping to get it working again. No dice, his luck had run out. Irate, he began the long walk back towards the city, walking down the Causeway toward Downtown. For some reason, Rudy decided to start taking off his clothes. Perhaps it was the Florida heat. By the time he made it to Downtown, he was completely naked, carrying only a bible. It was clear that Rudy was having a serious mental breakdown.

There were quite a few witnesses who had seen Rudy in his birthday suit, but nobody stopped or attempted to help. Upon reaching the city, Rudy came upon Ronald Poppo, an older homeless man who lived under the Metromover, Miami’s monorail system. Being that Rudy was completely naked, Ronald was a bit startled, but then again, you see a lot living on the streets. The two awkwardly chatted for a bit. They realized that they had met each other at a homeless outreach center a few years back, where Rudy had done some community service. The pleasantries ended there, though, as Rudy began accusing Ronald of stealing his bible. Then the zombified Rudy began to attack.

Rudy began beating on Ronald, angrily demanding that he return the bible. Obviously, Ronald hadn’t taken it; Rudy had dropped it a short while earlier. Rudy continued to pummel Ronald, then ripped off his pants. He then jumped on top of his victim and proceeded to cannibalize Ronald’s face. He chewed on his bare flesh, ripping off chunks with his teeth and spitting them out on the ground. He gouged Ronald’s right eye out and sunk his teeth into his left eye. The attack continued for a full eighteen minutes.

A nearby cyclist came upon the scene and called the authorities, one of the only witnesses to do so. The police arrived shortly after, but the damage had been done. Twenty minutes into his drug-fueled feast, Rudy had all but eaten the guy’s face. The police officer who arrived on scene called out to Rudy. He turned around and growled at the officer, and continued to bite Ronald’s face. The cop shot Rudy once, but he continued his attack. He then shot Rudy four more times, who then fell over and died.

The attack was captured on film by a security camera on a nearby building. The news went wild. The so-called “Miami Zombie Attack” was on every major news station across the globe. It became a symbol of Miami’s crazed drug culture. The attack was chalked up to bath salts, known colloquially as “Flocka,” a horribly dangerous twist on MDMA, a popular party drug. Flocka and bath salts have been blamed for all sorts of erratic behavior. The drug became so widespread around South Florida that was called an epidemic. The Miami Zombie Attack hyperbolized the Flocka epidemic into a single incident. It’s very likely that Rudy was on drugs, but it’s unknown if he had actually taken Flocka or bath salts. While toxicology reports say that only marijuana was found in his system, there were also unidentifiable pills found in his stomach. Due to the nature of the drugs he was likely on, no drug test would have detected the substance in his system.

After the Miami Zombie Attack, reports of similar incidents began to surface. A few days later, a man in New Jersey carved out his intestines and threw them at police while having a psychotic episode. In 2013, a man in Connecticut killed a homeless man with an ax, then ate his brain and eyes. A few years later, another drug-fueled face-eating incident happened in Jupiter, a town a few hours north of Miami, when a man murdered a couple in their home, then helped himself to their flesh.

Rudy and Ronald: Failed by the System

Given that this story is most often sensationalized in the greater realm of strange news, it’s important to learn who these people were, and how they ended up in such horrific circumstances.

Rudy Eugene was born and raised in Miami. His parents had immigrated from Haiti shortly before his birth. Rudy grew up in a religious household, often attending church every Sunday as a child. He was a high school football star, but the good times for Rudy ended there. After high school, he mostly worked dead-end jobs, bouncing around between fast food restaurants and telemarketing companies. At the time of the attack, he had been working at a car wash. Even in adulthood, he stayed in the church. He was always asking preachers for advice and had attended a friend’s Bible Study just a few days before the attack. Still, Rudy was an angry man, and had a history of mental illness that led to violent behavior. His marriage ended a few years prior to the attack, and according to his ex-wife, he was physically abusive. He had been arrested at least eight times, including one incident where he trashed his mother’s home and threatened to kill her.

Ronald Poppo was born in New York City, being raised in Brooklyn. He attended a prestigious preparatory academy, Stuyvesant High School, which has produced multiple Nobel laureates. Ronald was an active student, having worked in the office and being part of several clubs. He enrolled in the City College of New York after high school, but dropped out shortly after. Ten years later, in 1976, Ronald found himself homeless. At the time of the attack, most of his family had thought he was long dead. Just a few days before the incident, he was offered assistance by a local homeless shelter, but he declined. The attack left Ronald disfigured; he lost 80% of his face, mostly above his beard. He was left completely blind, having had his eyes gouged out. Doctors worked hard to restore his face to the best of their ability. They allowed Ronald to live in the medical facility indefinitely. Ronald is 73 years old, and is still living in a Medicaid clinic. He took up the guitar shortly after his recovery.

Both Rudy and Ronald had been failed by the system. Rudy clearly had a long-standing mental illness, and was likely a drug addict. Had there been a proper system in place, Rudy could have gotten the help he needed, instead of turning to drugs and violence. Ronald was a bright young man with a great future ahead of him. At the time of the attack, he was estranged from his family and had been homeless for over 30 years. A good system of social services would have saved a young Ronald from ending up on the streets.

Miami is a crazy place, with crazy people. But of course, if you’ve watched Scarface, then you probably already know that. But there’s a lot more to Miami than drugs and violence. The Magic City also has an interesting history, and it is quite haunted. Learn about the city’s role in the Cold War, when it housed a missile system in the infamous Krome Insane Asylum. After the missile silo was abandoned, it became a haunted hangout for local thrillseekers. Take a stroll through Pinewood Cemetery, one of Miami’s oldest graveyards. Many of the city’s pioneers are buried here, and after the murder of Dora Suggs, locals claim the cemetery’s been haunted ever since. The Alfred Dupont Building in Downtown is one of Miami’s oldest skyscrapers. After a progressive politician and businessman mysteriously “fell” from a thirteen-story window, the building has been haunted by ghosts. You should also read up on the top ten most haunted spots in Miami right here!