The Most Famous Haunted Dolls In The World 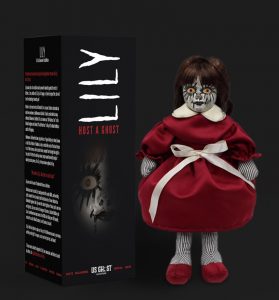 The world is full of haunted dolls. And I mean full. You really can’t throw a rock or two without hitting a scary doll that might, or might not, hold a captive spirit or a lingering demon. Bizarre and oftentimes harrowing effigies that seem to defy gravity, logic, and common sense. In today’s article, we’re going to give you the scoop on some of the most well-known examples – aside from that cool Krusty Doll from the Simpsons Halloween Special – of this phenomenon. Haunted dolls like the one that inspired Chucky, statues that sparked the Conjuring universe, toys you can buy to ward off evil spirits… and even that great Halloween episode from the Simpsons… and to think, that story inspired the new Child’s Play remake film; “a small problem in the factory. Someone flipped the doll’s programming switch from nice, to evil.” Today, we’re going to explore the most famous haunted dolls in the world… and this really is just a small taste of the thousand of icky macabre effigies that like to use the planet as their sandbox.

I’ll give you a quick background check, plus the location of these devilish dolls… plus, also a link or two if you want a more in-depth explanation on that doll’s biography and countless crimes against nature and the laws of logic. So, read on if you dare.

Annabelle is a Raggedy Ann doll claimed by Ed and Lorraine Warren to be haunted by an evil demon. The doll is one of the most famous of its kind thanks to films like The Conjuring and Annabelle. Aside from the usual shenanigans dolls of these kinds are associated with; noises, strange smells, walking on their own, asking for a beer, pilfering the last slice of pizza, and whatnots, Annabelle is also known for having killed a person. Her history is one of strife, horror, blood, and gore.

Right now, the doll is safely secured at the Warren’s Occult Museum; a cabinet of curiosity of supernatural objects and cursed mementos. No one dares plays with it and the few brave enough to actually take it, Annabelle, out of her box later recount a myriad of psychic assaults and unnerving dreams.

Robert is a doll is sooooo frightening that even Presidents write to him asking for his blessing and to “PLEASEEEE” not put a hex on their administration.

Robert can be visited while on holiday to that majestic land of sun-soaked beaches and bottomless margarita drinks known as Key West. You can find Robert on display at the East Martello Museum. Word of warning: don’t take a photograph of Robert without first asking permission, also don’t disrespect Robert, the doll has a nasty habit of holding a grudge. There are countless tales of folks leaving the museum and being besieged by tragedy.

Robert’s tale is bizarre and oftentimes hairraising. The doll was once owned by painter and author Robert Eugene Otto. The doll is alleged to be possessed by spirits. As a bonus, Robert inspired one of the most haunted dolls in history Chucky.

The story starts off in 1914 during World War I. Supposedly, the British arrested a German couple in Singapore they presumed were spies.

The couple’s daughter ran off and managed to get away… only to plunge off a steep cliff in Pulau Ubin and crash to her death.

Natives constructed a reliquary in her memory, with a porcelain altar and a Barbie doll that reportedly contains her crucifix. The doll, it is said, holds the child’s spirit and soul. The effigy some claim is haunted and over time it has become a local deity. The doll, benevolent in nature, helps out the community and guards them against ill-fortune. Every year a festival is held and offerings are made to the doll.

According to contemporary Japanese myth, in 1918, a teen named Eikichi Suzuki bought a large doll from Hokkaido providence for his younger sister, Okiku. The two became inseparable and Okiku gave the doll her own name. At about 40cms tall and draped in a classical kimono, the doll was lovely. Its hair was raven black and trimmed to roughly shoulder-length, in a traditional ‘okappa’ hairstyle. Her eyes were penetrating coals that seem to consume everything up in their gaze. The thing was mesmerizing and spellbinding, something to take your breath away.

A couple of years later, Okiku died. Her family came to believe that Okiku’s ghost was occupying the doll. The thing would move around and, even more harrowing – OK maybe not as much as “hey, that doll is moving!” – its hair was growing.

The doll now resides is a special shrine in Mannenji Temple in Hokkaido. The priests of the temple regularly cut Okiku’s still-growing hair.

Mandy’s origin is still a mystery. The doll was either made in England or Germany between 1910 and 1920.

Mandy is an enamelware baby doll bequeathed to the Quesnel Museum in British Columbia in 1991. Mandy is also said to have otherworldly abilities.

Mandy lies in a container with a toy lamb on her lap and eerily stares back at museum patrons. Visitors have described noticing the lamb outside of the case. Other guests insist that Mandy’s eyes follow them as they walk around in the room. The doll earned a certain level of fame when it appeared beside the museum curator and donor of the doll on the Montel Williams Show.

The Akodessawa Fetish Market is basically an open-air bazaar full of haunted dolls and other arcane knickknacks. The place is full of cursed and divine objects used for all manner of magical rituals. The district of Lomé, in the capital of Togo in West Africa, has so many bizarre occult objects that Gringot’s Alley pales in comparison.

The Akodessawa Fetish Market or Marche des Feticheurs is the largest voodoo market in the world. You can find in its stands monkey heads, skulls, cursed effigies, dead birds, demonic potions, crocodiles, skins, and other products made by tribal sorcerers and warlocks from indigenous plants and dead animals.

In the market, aside from a smorgasbord of haunted dolls, and magical effigies, you can also purchase love potions, curses, sorcery trinkets, bottled spirits, captive demons and just about everything you can think of.

Historians have tracked Lily’s background to the early 1600s, discovering tales of mystical practices, pagan rituals, and warding rights imported from Europe by the Dutch Colonists of Lower Manhattan. Handmade figurines like Lily were left out to scare off local spirits and new world ghosts, an archaic custom dating back to the Vikings and the Romans.

The original Lily was delivered to a paranormal research organization from its owner, who stated:

“I found her outside my door one morning, with a note that said to not put her by mirrors or in the same room I sleep in. I gave her a flashlight so she could drain the batteries, but instead, she made my lights flicker at night. My cat would not go near her, and my dog would just stare. At times I would be woken up from a dead sleep smelling burnt toast, or sometimes a sweet fruity smell. Her favorite color is red. That is all I know.”

The doll started to act strange and give off extremely unnerving paranormal vibes. The research group started to mass-produce dolls using the originals template. Now, you can actually own a Lily doll for Halloween.

Haunted dolls have always fascinated humanity. Since their bygone days in Egyptian lore as a talisman against Demons and other nasty critters, to their stump through Medival Europe as not only playthings but as ritual fetishes against vampires, ghosts, and ghouls. The first haunted dolls in history and most of the ones outside of the United States aren’t evil creations hellbent on our destruction but magical entities, emboldened by noble spirits, to fight against the forces of darkness and protect us.