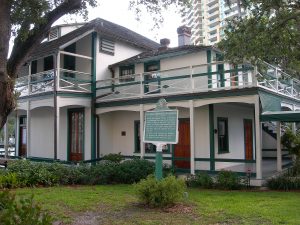 The Stranahan House is the oldest surviving building in Broward County, having been built in 1901. Though that may not seem like much, it’s actually pretty old considering most of the region was developed in the past 25 years. The historic house was established by entrepreneur Frank Stranahan and his wife Ivy Julia Cromartie, a teacher from Miami. The two helped establish the tiny settlement on the New River which would later become Fort Lauderdale. Originally, the Stranahan House was a public building; the first floor being a trading post and the second floor a community hall. Eventually, as the Stranahans prospered, Frank moved his business and made the Stranahan House his home. Disaster struck in 1926 when two devastating hurricanes put an end to the Florida Land Boom, and in turn, his profitable real estate business. Frank couldn’t take the loss. After a failed suicide attempt, he killed himself in the New River, kickstarting a wave of deaths that made the Stranahan House a paranormal hotspot. At least six ghosts live in the Stranahan House, including Frank, Ivy, three of their relatives, and the ghost of a young Seminole girl who died on the doorstep. Visitors often encounter Frank’s ghost at night, especially vagrants, as he wasn’t fond of the homeless. Many also have visions of Frank committing suicide along the banks of the river. Ivy is often seen as a gentle spirit who looks after the staff of the Stranahan House. The young Seminole girl is said to have a sweet tooth, often stealing candy from the front desk.

In the late 1800s, Fort Lauderdale was just a tiny outpost, named the New River Settlement. Besides being the site of a fort built for the Seminole Wars, no significant development occurred until the late 19th century. The tiny town was only accessible by boat until 1892, when the first road through the region was built, which connected Miami to Palm Beach.

Frank eventually saved up enough to buy some land. He moved his business further down the river, and with it, the center of the budding town. The community had grown large enough to hire a teacher, and so Ivy Julia Cromartie, only eighteen at the time, was hired by the county school board. She came from Lemon City, a small town near Miami which is now a part of Little Haiti.

Over the next five months, Frank and Ivy fell in love and eventually married. Ivy gave up her paid position, though she didn’t quit teaching. She became a philanthropist of sorts, helping to educate the Seminole children. She functioned as the liaison between the government and the Seminole tribe when the expansion of Fort Lauderdale forced Seminoles into reservations. Ivy also took part in the movement for woman’s suffrage and helped establish Everglades National Park.

In 1901, Frank began building his place of business, called the Stranahan House.  The first floor functioned as a trading post, the second floor as a community hall. He later expanded to include a general store and a bank. After building a new building to run his business out of, he had the Stranahan House renovated as a home for his family. He added electricity and plumbing in 1915.

The town was renamed Fort Lauderdale in 1911, after the leftover supply fort from the Second Seminole War. Frank had become a land and real estate magnate and he and Ivy took lead roles in developing the city.

Ghosts and Death in the Stranahan House

In 1926, two major hurricanes stopped the Florida Land Boom dead in its tracks. The values of his properties plummeted. Markets crashed, and so did his assets. His farms were wiped out by the storms. The people who had invested with Frank were ruined as well. As far as he knew, his life was over. Adding to the mess, he was diagnosed with cancer shortly after. Frank attempted suicide, prompting him to be sent to a mental asylum.

Ivy begged the authorities to release Frank and have him die a home with his family in the comfort of his home. They agreed. Shortly after arriving at his home, Frank succumbed to his depression and drowned himself in the New River. He tied an iron gate to his ankle and jumped in the water, ensuring that he wouldn’t be able to float back to the surface.

Shortly after Frank’s death, a young Seminole girl came to see Ivy, but collapsed in the doorway and died. Ivy’s younger sister, Pink, later moved into the house when she was seven months pregnant. She hoped that after three failed pregnancies, she would finally have a live birth. But after hearing about her cheating husband, she went into premature labor and gave birth to a stillborn, then died in the hospital. Ivy’s brother, Albert, moved in, and after living a wild life, died after contracting tuberculosis at a party. Ivy’s father, Augustus Cromartie, got very sick towards the end of his life. Ivy took him in, and he died in the guest room shortly after.

Ivy finally passed away in 1971 in at upstairs bedroom. She was 90 years old.

All six people who died in the Stranahan House still dwell inside. Their souls never left, and it seems like they enjoy their residence. The ghost of Frank Stranahan has been seen by a few reliving his suicide. They’ve seen the depressed and defeated man jumping into the New River with an iron gate tied to his ankle. Most of Frank’s apparitions tend to be pleasant, as he often appears briefly during tours or community events. Like the city of Fort Lauderdale as a whole, Frank isn’t very friendly to the homeless. Homeless often try to sleep on the first-floor veranda, but Frank bangs on the windows and chases them off the property.

Ivy is a kind spirit, just as she was in life. She’s been known to look after the staff, especially when doing dangerous tasks like climbing to the roof or attic. Ivy remains invisible, but staff can feel her gentle presence, usually a cold hand on their shoulder or the smell of her favorite perfume.

The young Seminole girl has been picked up by an EVP and was very friendly according to the investigators. She’s also been recorded on EVP singling and chanting. They say she has a strong sweet tooth. She steals candy from the front desk, but since she can’t eat it, she piles it up in the attic.

The ghost of Pink and her stillborn baby stay in the parlor of the Stranahan House. Visitors and investigators have noted an unseen presence, accompanied by two floating orbs of light. Though she’s enjoying her role as a mother, she longs to get back at her unfaithful husband.

Albert is one of Ivy’s brothers and is still just as irresponsible in the afterlife. He’s the troublemaker of the Stranahan House, often knocking things over and making life difficult for the staff. He yells at people he doesn’t like and teases visitors. Albert warms the room up for women and makes it cold for men, and sometimes gets a little too flirtatious with the female guests.

Augustus Cromartie’s ghost is grumpy, as is blamed for falling books and cold temperatures in the gift shop, which was his old bedroom. He annoys the staff by moving things around when they aren’t looking. Perhaps he simply doesn’t like being intruded upon.

Learn more about the haunted history of South Florida!

South Florida isn’t just fun in the sun. Besides the constant rainstorms, ghosts, spirits, and a bloody history bring darkness to the beaches of South Florida. Check-in at the Hollywood Beach Resort, where bugs and critters will keep you company, along with the many ghosts that live in this dingy hotel. Take a stroll through the abandoned Parkway West Medical Center, where a psych patient killed his doctor while the hospital was still open. The building also served as a hideout for a machete-wielding murderer. Have a picnic under the Devil’s Tree in Port Saint Lucie, where a former cop raped, murdered, and cannibalized two teenage girls. Okay, so a picnic isn’t such a great idea. But you should still read about the top ten most haunted spots in Miami while you’re here!