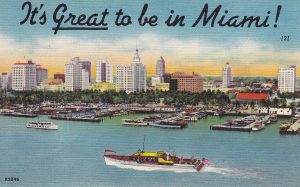 Miami is the great beyond, that outer-rim system even the pluckiest space adventure cringes at. A place full of phantoms. Let’s discover the Miami Ghosts. It is the outer border to that Wild West State of desperados and cut-throats known as Florida. This is the place where the knaves, villains and the desperate flee to before taking the drive to Key West and renting out a cigar-boat.

“Hey, amigo, mucho dinero… take me to Cuba, Los Federales are after me.”

Since its inception, Miami has had a magnetic pull for all manner of scumbags. It became the flute song for cobras and snakes the very second Henry Flagger opened it up. High rise buildings founded with drug money during the daring days of the Cocaine Cowboys. Smuggler dens and coves for Al Capone’s merry band of men when Prohibition was a thing. Seminole Indian hideouts for scalping parties during the Union’s expansion. Hotels brimming with surveillance gear courtesy of wet-work specialists trying to catch Fidel with his pants down at the hight of the Cold War.

During the ’80s, an FBI agent went up to President and summed up Miami in one damming phrase:

“Miami is the most dangerous place on Earth.”

That very nonchalant attitude of the citizenship towards firearms, machetes, and small explosives is still very much in vogue today. Miami is a smorgasbord of personalities and poses, of high-octane thrill-seekers with the survival instinct of lemmings. It is a place with the highest number of caught fugitives in the whole of the United States. The moorland with the most amount of serial killers per capita. A tropical shirt-wearing boondock with more wacked out antics than a Looney Tunes episode.

Miami is without a doubt a: Responsibility Free-Zone.

A free zone that’s become a melting pot for religions – among them Luciferian and Voodo; for corner entrepreneurs – meth and coke are very much in style; for wanted fugitives – over 90 just last year.

But, above all, Miami has become the playground for all those revenants, the flotsam, left in the wake of that care-free savage nature… For all those ghosts and tragic tales tossed on the side roads by some of the region’s more aggressive temper tantrums.

Each entry is accompanied by a link that will take you to an in-depth exploration of that entry.

This landmark hotel smack dap in the middle of Coral Cables seems to be catnip for specters. One of the most opulent hotels in the region has also become one of the most haunted places in Miami.

Supernatural phenomena are a dime a dozen in this place.

It is the home of Miami’s most famous spirit, Thomas “Fatty” Walsh. Fatty was a renowned mobster/lounge lizard with an eye for sexy dames, poker, fast cars, loose revolvers, and smuggled hooch. The mobster ran a speakeasy on the 13th floor of the Biltmore during the roaring 1920s. After Fatty was given the dirt nap treatment at his casino, courtesy of a rival gang, the ectoplasmic shenanigans started up.

It’s been told that his desire toward attractive gals continues to this day, and good-looking women who get on the elevator constantly find it making a pit-stop at the 13th floor.

And the Biltmore isn’t just a place for ghosts of mobsters, it’s also the site of G.I wraiths. During World War II, the Biltmore converted into a military hospital and then a veterans’ hospital. The ghosts of some of the men who died there are thought to drop by from time to time.

And, that’s just the tip of the iceberg. The Biltmore has dozens of ghosts, goblins, and ghouls prowling its corridors. Misbehaving whisps with a penchant for mayhem.

Imagine if H.P. Lovecraft was given free-reign over the construction of something in the Sunshine State… Even that fevered mind couldn’t have come up with the Coral Castle.

This landmark of Miami-Dade County is just weird. It’s weird on a scale that even lunatics off their pills would do double-takes. This is the Florida equivalent of Stonehenge; no one knows why it was built nor what it actually represents.

This sculpture garden in stone was quarried, cut, transported and sculpted by Edward Leedskalnin. How one fellow managed to accomplish this unusual feat has remained an enigma since Coral Castle opened to the public.

More importantly, is the fact that minds are still boggled by what exactly the Coral Castle represents. The place is a mismatch of architectural motifs, druid and pagan symbols, Egyptian decorations, Creek whatnots.

Coral Castle has always been shrouded in mystery and that bizarreness seems to have attracted all manner of entities to the spot. From ghosts, vampires, sorcerers and, even, the occasional flyby of UFOs, Coral Castle is a must-see for anyone with an interest in Dark Tourism.

Yup, sooner or later a cemetery was going to pop up on this list. Rule number 3 of any haunted hot spot list:

“Always have a cemetery.”

Carved into the bustle and noise of downtown Miami’s Edgewater/Omni neighborhood, the City Cemetery has the distinction of being a hotbed of supernatural high jinks.

The tombstones of this hallowed playground for the dead seem to read like entries in a book on the history of Florida. The cemetery is the home of Julia Tuttle, the Burdine Family, founders of the Burdines department store, and Carrie Miller, who was buried in her cot rather than a casket and then encased in cement.

It’s also the final resting place of Confederate soldiers and Union veterans not to mention countless, upon countless other restless dead. Each of these entities just itching to spook visitors once the sun goes down.

Located in a historical preserve in Palmetto Bay, Deering Estate at Cutler is a little amber gem of old-time Florida. The huge mansion with immense gardens is a treasure trove of Florida memorabilia; a time machine of the grand epoch of railroad tycoons and land barons.

It is also a prehistorical burial mound with fossils that date back 50,00 years.

Sightings of all manner of specters and poltergeist is a very frequent occurrence. Parapsychologists scour the landscape like armies of ants searching for THAT video proof of the afterlife that will validate their existence.

Deering Estate is the one place in Florida that you’re likely to get a gander of spirits, and only have to pay a very cheap cover-charge.

Found in Little Haiti, Villa Paula will slap you silly with its beauty and charm; you simply can’t help but be spellbound by it.

One of the most well-known haunts of the Villa is the place’s namesake, Paula. The Consul’s wife died after a prolonged fight with gangrene due to complications from a leg amputation. Visitors of the Villa are shocked when they spy from the corner of their eye a decrepit one-legged fiend scuttling towards them. This, plus a dozen other ghost-tales gave the Miami Herald the leeway to call Villa Paula:

“The most haunted house in Miami.”

One of the first skyscraper to grace the legendary Miami skyline. The DuPont building stands on the remains of the once-proud Hotel Halycon.

This building has a rather sketchy history with the paranormal.

Let’s dive right into the tale of Grant Stockdale. Stockdale, who was a close aide of US President John F. Kennedy, died under mysterious circumstances in this very building. 10 days after Kennedy’s assassination, Stockdale either jumped or was pushed out from the 13th floor of this skyscraper.

That leap into the Miami air christened the place with its first spirit. Nonetheless, Stockdale isn’t the only apparition that seems to haunt the place. There are rumblings and unnatural noises from rooms sealed to the public, scratches from floors prohibited for use, and hallways that at night no sane person would dare travel through.

This playhouse was inaugurated in 1927 to a roaring and decadent public wanting something new. The place was once a movie hall for Paramount Pictures and a big draw in the area. For a time, The Playhouse was the hot-spot for the elite, for the top dogs, for the socialites.

As Miami expanded, and hungry entrepreneurs opened other venues, The Playhouse slowly started losing its glow and appeal. Finally, in 2006, with staggering debt, the owners had no other choice but to close shop and leave the desiccated and gutted place to wither on the spot.

Rumors started making the rounds the very minute the building shifted from a Playhouse into the proverbial eerie abandoned mansion kids dare each other to past the night in. Rumors of demons, voodoo priestesses, and windows weeping ectoplasm seem to have become the stock and trade of this once legendary building.

One of the oldest cemeteries found south of the Miami River, Pinewood is most known for the truckload of spirits that seem to haunt its many visitors’ nightmares.

Spirits like that of Mrs. Dora Suggs, the last person buried on this spot. Dora, 29 years-old, was viciously murdered in 1940. She was raped, mutilated and found partly dismembred near a banana tree.

Her spirit along with countless others haunts the grounds of this less than holy site. Eerie sounds burying themselves into the common wander’s ear at every corner; the wind carrying the wail of the dead.

A little known fact about South Beach, or SOBE as it is now called,  is that back in the high point of the Second World War when the US was fighting the Axis powers, this vacation dreamland became a military deployment camp.

For over 4 years, the area was used by Uncle Sam to train troops. The spot was a camp to house servicemen, keep morale up and distribute – thanks to Flagler’s trains – them all over the nation. Ocean Drive and the area around it became a free-for-all playground for young yanks seeding their wild oats and getting their freak on.
Most hotels were taken over by the Military Effort and The Besty not only became a makeshift barracks but the camp’s bivouac hospital.
The place has a reputation for wandering spirits. The Betsy is haunted by soldiers that either died from an illness, a lover’s spat or from taking a self-inflicted bullet to the head.
Click here for more of the inside scoop.

What’s Miami without a good celebrity scandal, some magnificent sunset views of the Atlantic, a posh fashion twang and a bloody murder or two? This is the last top ten Miami Ghost.

The Villa Casa Casuarina fits the bill for all of those. This is the former Versace Mansion and – unless you’ve been living under a rock – you know exactly what happened here.

But it’s not just Versace’s ghost that seems to haunt this very posh renovated place, it is also has a lithany of ghosts and specters from before Versace’s time. This is a place with almost 100 years of history, and long before that fashion icon called it his home, the Villa Casa Casaurina had its fair share of demons and wraiths.

The Villa has a rather spooky history in the annuals of Miami lore. The boutique hotel is full of spirits, goblins and other things that go bump in the night.

Click To Join Our Haunted Monthly Newsletter! Stay updated on stories of hauntings and intrigue!