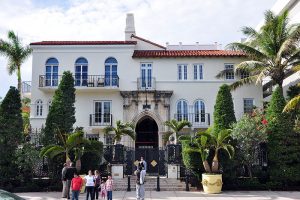 Miami has always had a love affair with celebs; it’s part of its charm. When people venture into Miami, they want to be smacked in the face with all types of Artists like shenanigans. This is the place where Grid Iron giants crash their cars into street corners, where Justin Bieber makes a fool of himself, where the Gloria Estefan opens up a restaurant…

Well, for those with a taste for both the ghastly and great primetime TV, right there is where Ricky Martin held Edgar Ramirez blood choked, bullet-ridden corpse… Given that intro, you can now imagine where this story is headed to.

Before we speculate on the glitz and glamour of Hollywood and Fashion, with a pinch of death and violence that was the Gianni Versace shooting, let’s talk about this Ocean Drive monument. Let’s shot the breeze on the ectoplasmic drenched brouhaha that is Villa Casa Casuarina… an unruly poltergeist gang war that should have a squad of Father Merrins on speed dial.

The History Of The Villa.

This happening unit was built during the heydays of Capone and the Chicago Outfit, the final getaway for that time in our nation’s history when the Capitol concluded that it was time to go “cold turkey.” Established by the wealthy magnate, Ronin Wolf, and accredited to celebrated architect Alden Freeman, the huge mansion – one of the most coveted and valuable locales in the states; last purchase at a whopping 45 million bucks in 2013 – was fashioned on the Alcazar de Colon from Santo Domingo.

Before we dive headlong into the grotesque, the morbid, and the truculent, let’s talk a bit about some of the more outré and obscure features of this phantasmagorical house; some nifty tidbits to add character to the entire fantastical story that’s about to strike our fragile sensors.

Now, let’s talk ghosts, shades, spirits, and the things that go bump in the night. Let’s foster some nightmares.

The first proprietor of the Villa was Joel Freeman, the steward of Standard Oil… Two years after he walked into the spot, a man of impeccable health, Freeman died of a perplexing and prolonged sickness in the master chamber. So begins the spookfest. Freeman’s family, either pushed on by grief or by some Lovecraftian induced malady, started to go insane slowly. Nerves wracked, they finally sold off the property, for less than 100 thousand bucks, to Jacque Amsterdam.

Years later, one of the Freeman, Joel’s youngest adopted son, would say:

“The vibe was fatalistic. Like my dad was constantly dying, over and over, and over again. You would wake up, from a vivid dream, sure that you had just heard his guttural screams of anguish… And it wasn’t just me, more than once, I’d come upon mom in her bed, sobbing uncontrollably, raving about how something cold and frigid had put its arms around her torso, soothing invading and slithering underneath her bedsheets.”

When Jacques purchased the house, after more than one terrified worker quit suddenly, he had the whole place hallowed and consecrated by a unit of priests and holy men from the local church. When the stone statue of Aphrodite in the courtyard, a beautiful piece created by a Yugoslavian sculptor in 1926, started unsettling Jacques – “the thing,” he would comment, “following me with its black eyes even into my sleep” – he chose to cut his loss and transformed his home into a 24 unit apartment building. 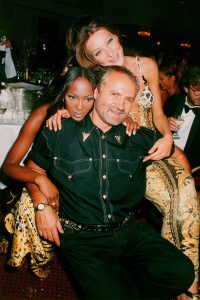 Until 1992, when Gianni Versace acquired the house, the architectural morass was swapped from one corporation to another. The place had, by then, become a sucking void of ill portents for the locals. Prostitutes, drug dealers, and sicarios would somehow be influenced and drawn to the corners of the mansion’s dark intersections, whatever remained inside, attracting their black hearts. At night, the residence would be plagued by the revealing signs of what a certain parapsychologist would later claim was – “an infestation.” Heart-raising horrors that would vanish as soon as they woke up, leaving them agitated and sweating chills in the Miami heat; objects fading and vanishing before their presence; shadows creeping at the edge of their eyesight; animals snapping at empty corners; loving couples that never once revealed an iota of malice, devolving into blind violence and rage overnight.

“There was something in the closet. Each night you could hear something moving inside. I thought it was rats at first, had the place checked by exterminators. Finally, when I couldn’t take it anymore, I had the doors chained shut. Then, one day, after I woke up and the padlock on the chains had somehow shattered… that’s’ when I moved out.”

To this day, Andrew Cunanan, spurred by some deep psychological trauma, flew into a 3-month killing spree. The man labeled a serial killer by the press and making a merry chase of law enforcement. That maddening springboard of madness ended on the steps of the Villa with Versace fatally shot at point-blank range. His motives to this day remain a mystery. When Cunanan was finally tracked down, the madman decided to leave the nation with that question mark – spurring on shrinks and speculators to hypothesize why he did it – by taking his own life.

His body, found just a few blocks from here in a luxury houseboat after he took a .40 caliber bullet and blew his head off. The criminal having meet his doom in the midst of a huge manhunt and surrounded by eager policemen wanting to avenge a regional icon.

Since his death, Versace, a hero of the community, still wanders the Villa’s corridors. Most folks who have felt his presence talking about a tranquil spirit, one that alleviates their anguishes and somehow balances out the offensive and sometimes omnipresence sense of foretelling, some salons in the house seem to radiate.

Since Versace death, the house was once more auctioned, this time to a luxury hotel conglomerate…. The place, becoming yet one more beam of the hundreds of haunted hotels that somehow seem to sprout like weeds in the Miami area.