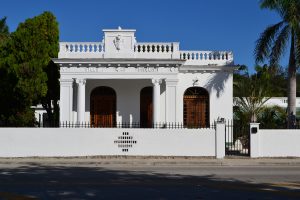 You really have to hand it to a place, give them a standing ovation, clap til” your arms fall off, pat them on the rump and go:

When said place excels above its peers. It’s something quite unique and awe-inspiring to behold. That moment of perfection when a new wonder is tossed in with the Pantheon of 7th; when some restaurant comes out of the woodwork and scores a Michelin Star; when a hot dog cart down by the docks gets one of those funky TripAdvisor plaques.

Well, in Miami, you really have to give a place its due when it’s named – among the bug-s#!t insanity that is South Florida – the most haunted house in the State. Miami is a carnival that prides itself in such hilarious BS a:

So when a place stands above the rest as a guano sanctuary of insanity, you just have to bow your head and go: “you, good Sir, have it shut tight.” Miami is a place where you’re walking down the street of avenues that – as the Washington Post once succinctly said – Cocaine Built. A place where you have an estate out by  Cutler Bay where kids used to have soccer games with unearthed Indian skulls.

Well, Villa Paula, takes the cake, because in spite of Coral Castle and its Fairy madness, in spite of the Biltmore and it’s gangster ghost, in spite of the Miami Cemetery and its voodoo rituals, this quaint unassuming house was named:

“The most haunted house in Miami.”

Villa Paula, a tale of Cuban spies, diplomatic intrigued, and a one-legged lover.

It all starts with Fulgencio Batista and that scene from the Godfather II where Pacino grabs his brother and whispers into his ear:

What does this museum have to do with that? Well, this was once ground zero for Cuban-American relationships. Way before the proto communist and poster-child for rocking a beard and cigar, Fidel Castro went bananas for Cuba, that tiny island was basically Las Vegas, but with even less oversight.

In 1899, after the Spanish-American War, Cuba gains its quasi-independence. Spain wipes its hands of the banana republic and the colonial government calls it quits. The “gringos” take on the mission of the provisional government of the island and begin to install puppet governors. For almost 50 years, Cuba becomes a playland for the Yanks. They start to use the place up and basically create a Responsibility Free-Zone.

When prohibition was running rampant in the states, Cuba was the hot spot where the elite went to get wasted… It was also a smuggler’s paradise.

During these fruitful years of knave synergy, the mob took a shinning to Cuba. They built hotels and resorts, made huge land grabs, and even had the government taking advice from the likes of Meyer Lansky.

Miami, meanwhile, another mob infested locale, slowly became the launching grounds for clandestine meetings between however was in charge of Cuba that month and however needed a kick back up in the Hill. Mobsters would serve as go-betweens and hand out envelopes of cash from one friendly nation to the other.

Given the importance of Miami in its economy – the nation was a pipeline for everything decadent during the 20s – Cuba decided to not only install a consulate but bring about one of its best troubleshooters to oversee that beachhead, Don Domingo Milord. They needed someone with ice in their veins and swagger in Miami.

Domingo, in the midst of the roaring twenties, decided to construct a small mansion. A house complete with Moorish arches, Spanish Tiles, wine cellars, 10 rooms, 18-foot tall ceilings, Tuscan columns, and more Greco-Roman Flourishes than the Parthenon. The man knew he would be hosting some rather VIP guest and when he was going to throw a party, he was going to do it in such style that even Gatsby would be impressed.

Now, comes the part where everything goes tits up and the caca hits the fan. The house Villa Paula was basically built in record time and was christened in the middle of a hurricane. No sooner had the last block been cemented in when a massive hurricane hit Miami and almost wiped the place off the map. The finger of God quiet literarily came down and did its level best to scrub that smear off the planet.

Rumors began to float that some of the construction materials used were cursed; the handpainted tiles of dubious reputation being the first suspect on the list. Others said that the workmen brought from Cuba to complete it were nothing more than indentured slaves. Others that a Voodoo priest put a hex on the spot. Others that it was built on a cemetery. Others that aliens infected it with radioactive isotopes. The truth is that in Miami everyone has a theory, and half the people pontificating and dredging up the past still have acid flashbacks from the 60s.

After it was inaugurated, Don Domingo decided to call it in honor of his sweet wife, Paula.

Paula was hurt one day and her leg had to be amputated… rip the band-aid right off that headline. For the 4 years that Don Domingo lived in the place mishap after mishap assailed him. It was one tragedy after another. His wife Paula would continue to deteriorate and finally, at 61 years old, she died at Miami Jackson Hospital on account of “complications”.

“Milord by then had retired as a consul due to health reasons. He died a year after his wife. But what was really odd is that back in those days, when an M.E. labeled a death as ‘a result of complications’ it was because he’s stumped. In other words, her death was a bit of a mystery.”

Anyway, by the time Paula died, the Villa was up for sale. The Cuban government wasn’t doing too good and the upkeep was really making a dent. The first person who bought the house was Helen Reardon. She purchased the place at a steal and lived there until her death in 1960.
Then, the deed started changing hands.
It began as a senior citizen’s home. Then a crack-den. Then a hippie hotel. And finally, a place for squatters to hang out and do well what squatters are prone to do.
“The house really feel into a state of disrepair. This was during the time when Miami was being flooded by Coke and Marihuana. Illegal substances where being bought and sold in every street corner, and the Villa sort of became ground zero for all those lowlifes. It was a place were cops would collect payoffs from dealers and pimps.”
Finally, after years of serving as crime central, in 1974, Cliff Ensor bought the Villa and refurbished it.
That’s when the hauntings made headlines.
“The place already had a nasty reputation. You don’t become a beacon for the unwanted without getting some scars in the process.”
Let’s reiterate. So far, in the span of fewer than 50 years, the Villa had become a diplomatic cesspool where mobsters and officials made backdoor deals with Cuba’s puppet regime. Where prostitutes and vandals set up shop. Where people went missing, cause, that’s what normally happens in crime-infested neighborhoods. And where the person whose name the households, not only got her leg chopped off but died of “complications“. In ghost story that what we call a trifecta or as Ian Flemmings would say:
“Once is happenstance. Twice is a coincidence. Three times its enemy action.”
Anyway, that’s when someone, RELIABLE – because even back then there were rumors of the nastiness that called the house it’s home – started to record all the ghostly shenanigans.
Cliff Ensor experienced the following.

And the two big ones, the ones that drove him to try to sell off the property only a year after he bought it:

All of that in ONE year… Not a lifetime, not a century, but ONE year.

Since that moment the place has held séances and psychic meetings. Several psychics, including Rev. Emma Tandarich, visited the spot.

“Some of the psychics even recorded the identity of some of the ghosts. One of them is believed to be Paula. The second is a thin man with a top hat, the third a fat lady with a red dress, the forth a dame who lost a religious medal fo some kind in the garden, and a fifth a young girl looking for a place to bury her illegitimate child. There are also, as some have claimed, demons lurking around the house.”

That’s when local Newspapers started to cover the story… and the can of worms was pried open. Mind you, up until this period records were a bit sketchy and the internet was a pipe-dream. These sleuths and ink-slingers started to explore the house’s history and came upon a series of odd tellings and tales that never made the headlines; the sort of tidbits skeptics shelve as the ravings of madmen.

After Ensor moved out, he did his level best to sell the place, and it took him over 10 years to actually find a buyer; a postal worker who bought the hauntings at Villa Paula for a measly 110K. After he learned of the place’s reputation and spend a night there he backed out of the deal despite the fact that he already had a crew on standby; he was going to transform the building into a restaurant.

Finally, the place was bought by D. Luciean Albert. The man kept the house for more than 15 years and neither denied nor confirmed any of the stories attached to Villa Paula and its ghosts.

Today it is a museum and to many in the neighborhood a repository for evil.

For more check out our  Ghost Tours in Miami area and other hauntings of Miami.